NACTO has released a report outlining how cities can adapt to a future with autonomous cars.

The National Association of City Transportation Officials (NACTO) has released a report titled "Blueprint for Autonomous Urbanism" that outlines their vision for cities as autonomous vehicles begin to become the norm. The report describes a range of recommendations for cities to follow to accommodate autonomous vehicles but government officials are under no obligation to adopt them.

The report takes a pedestrian-friendly approach to think about the future suggesting cities should limit self-driving vehicles to about 30 kmh and allow pedestrians to cross streets anywhere rather than at dedicated traffic lights or zebra crossings. While this may mean longer commute times it would definitely make ground level at cities much more pleasant. The authors cheerfully describe the end of the notion of jaywalking saying, "The instinctive human act of walking straight to one's destination, pejoratively known as 'jaywalking,' becomes simply 'walking.”

While cities being flooded with autonomous vehicles is a long way off yet, NACTO believes we should take this opportunity to rethink how we want the future of our cities to look and behave. If autonomous driving offers us the chance to create safer streets then we should take advantage of that and protect those that are currently most at risk on the road: pedestrians and cyclists.

In a dream world, autonomous cars will be able to sense objects in their path and slow down or stop to avoid the potential collision. This could mean a city where bikes and pedestrians are wandering more freely amongst slow moving traffic.

If this is actually how autonomous cars will behave is yet to be seen. If the technology doesn’t develop quite as nicely as the NACTO report authors would like to think, instead of pedestrians being able to wander across streets with no risk, they may instead be forced to cross roads on footbridges to avoid any interaction with the dangerous cars below. 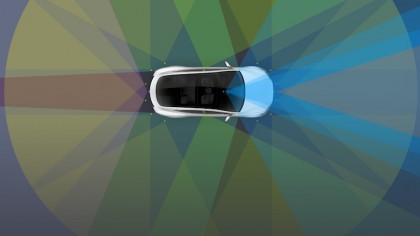 Autonomous vehicle adaption may result in even more crowded streets as older cities struggle to adapt to the new technology. An important takeaway of the report, whether you are an optimist or a realist, is that cities must begin to think about the change in technologies as early as possible to give them the best chance of adapting with clever design interventions.

Already cities are seeing an increase in the demand for electric vehicle charging stations that have caused some policymakers to scramble with legislation to keep up.

NACTO sees the report as a starting point rather than a hard set of rules. NACTO Executive Director Linda Bailey described the report to media saying: “This is the start of a critical conversation with AV companies about what cities need today and will need tomorrow.”

The Self-Driving Coalition for Safer Streets responded to the report's release saying that autonomous vehicles should be able to follow the rules of the road, such as speed limits.