Gummy bears might hold the key to making brain and heart monitoring simpler for medical professionals.

What if patients could swallow their own sensors? That's the question a team of European researchers answered by developing a new way to monitor patients. A team from Technical Univeristy of Munich developed a way to print microelectrodes onto gummy candies. They hope the gummies could provide a sweeter and easier way to monitor electrical signals in the brain or the heart.

Microelectrodes need a soft material to function best, and Professor Bernhard Wolfrum's team thought outside the box for a unique substance. The researchers used inkjet printing to put a microelectrode array onto the popular chewy candies. The array contains a large number of electrodes and can successfully detect voltage changes found in neurons or muscle cells.

The gummy bears also gave the array an added benefit of the candy's trademarked softness. Often, microelectrode arrays contain hard materials like silicon. Those materials don't do well when they come into contact with living cells, the UTM team noted. In a laboratory setting, the hardness of even the smallest sensor can trigger inflamation, affect a cell's shape, or even cause an organ to stop functioning as a reaction to the electrode materials.

The gummies gave a softening effect to the array, which the researchers said showed favorable results. It also sped up an often time-consuming process and allowed the team to bypass the specialized equipment needed to make electrode arrays.

"If you instead print the electrodes, you can produce a prototype relatively quickly and cheaply. The same applies if you need to rework it," explained Wolfrum, who serves as Professor of Neuroelectronics at TUM. "Rapid prototyping of this kind enables us to work in entirely new ways." 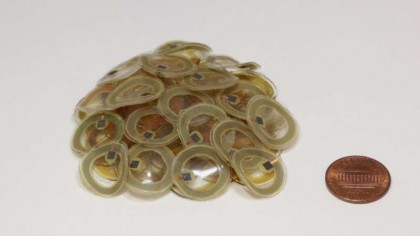 The electrodes were printed using a high-tech version of an inkjet printer, the team explained. The electrodes themselves were carbon-based ink. In order to prevent the sensors from being too sensitive, the team applied a neural protective layer to the carbon paths.

It is important to note that the team didn't simply use store-bought gummy bears for this process. They tested a variety of substances like a softer form of silicon before settling on gelatin.

During those tests with cell cultures, the UTM researchers confirmed that the sensors gave off reliable measurements. The sensors could identify and track measurements as specific as a single cell.

"The difficulty is in fine-tuning all of the components - both the technical set-up of the printer and the composition of the ink," said Nouran Adly, the first author of the study.

The UTM team said that this process could be used in a number of different areas. The process would work for rapid prototyping in research. The appeal of gummy bears could make it easier for patients to be treated -- especially if they're a younger patient hesitant or scared about being monitored.

"In the future, similar soft structures could be used to monitor nerve or heart functions in the body, for example, or even serve as a pacemaker," said Wolfrum.

The team will continue working on the electrode array itself. They want to develop a more complex 3D version of the microelectrode array. They're also learning more about printable sensors that could react to various chemicals rather than tracking electric fluctuations.

Samsung Offers a First Look at their 2020 TV Lineup

Sniffing It Out: Dogs Increasingly Used to Spot Diseases in Humans