This Indoor Drone Racing Tournament Will Blow Your Mind

An ecstatic drone racing tournament has just been held at the Mobile World Congress Shanghai 2017 event last Saturday. Drone pilots from around the world and all over China gathered in the largest indoor drone racing event in Asia to compete for the tournament title.

The 2017 Mobile World Congress in Shanghai

The international group of drone pilots who competed in the tournament had the opportunity to show off their skills in flying the latest drone FPV (First Person View) technology. The pilots had to fly through the specially designed race course in a daily knockout tournament, which culminated on July 1, 2017. The overall winner and 2nd runner-up came from Britain and the third runner-up was from China, all of which received cash prizes for their victory.

During knockout laps, racers have to wear a goggle device where they have an exclusive view of the race course as the drone flies through it to complete the track.

The race course is a long loop of brightly lit tracks and check-points. Many of the drones crash because of the speed they have to race at and that the course is intentionally designed with sharp turns. This makes the drone racing tournament a particularly challenging event for the pilots and a spectacle for the audience to behold. In the event that a pilot's drone crashes, the drone must be picked up, fixed, and wait for the next available knockout run. 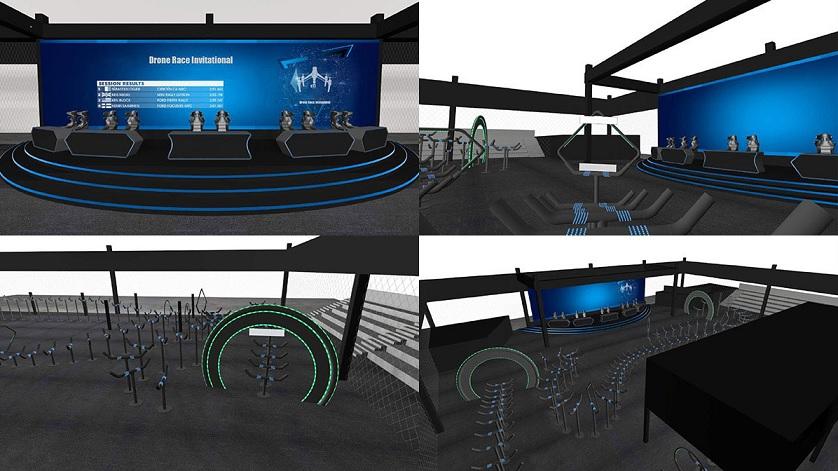 Drone racing is a global thing

The first World Drone Prix was held last year in Dubai where over 100 teams competed for a generous cash prize of $250,000. 32 teams from around the world took part in the drone racing event that was hosted by Skydive Dubai. This one looked more exciting than the most recent drone racing event that took place in Shanghai a few days ago. Simply because it was held outdoors, which means there's a larger area to race and the twists and turns were extremely challenging.

Dubai's drone racing course was a specially designed three-dimensional aerial track dubbed as the 'Rollercoaster'. It used an advanced GPS tracking system to ensure that the drones remained within the 5-meter diameter of the track. The lights on the track essentially tracked the first and last location of the drone and fed the information to the audience so they can keep track of rankings. Pilots used a real-time visor device in order for them to navigate via the onboard camera attached to their drone.

After the indoor MWC Shanghai 2017 drone race, there is no confirmed news on whether there will be a World Drone Prix tournament for 2017. Although various drone racing events take place around the world like in Australia, the UK, China, the US, and more, the World Drone Prix is still considered to be the largest FPV tournament.

SEE ALSO: What Types of Drone-Related Careers Are There?

A Modified Raspberry Pi 4 Lets You Control a Flamethrower. With Your Mind?

Will We Ever Cheat Death and Become Immortal With Mind Uploading?