Shark-Inspired Cover Gets Rid of 99 Percent of Surface Bacteria

One company's development could save thousands of lives each year, as the technology effectively prevents the growth of harmful bacteria.

While sharks might conjure up the image of Jaws or hundreds of sharp teeth, the oceanic carnivores can be incredibly beneficial. One engineer took inspiration from sharks to create a way to drastically reduce the spread of viruses and bacteria.

Anthony Brennan developed Sharklet Technologies Inc. and a textured adhesive film modeled after sharkskin. The film stops bacterial growth on a number of different surfaces -- including medical devices. The film is also made entirely from natural sources.

In an interview with the publication Free Enterprise, the University of Florida materials science and engineering professor explained the benefits of his creation.

"We’re passionate about developing and bringing to market advanced, new surface technologies that manage microorganisms to make the world a healthier, environmentally safer and better place," Brennan said. "And, yes, sharkskin is central to our success, as our product is a bio-inspired patterned designed by the visualization of shark scales."

Brennan said he's always looked toward nature and biomaterials for new inspiration. During his time at the University of Florida, the Office of Naval Research gave him a grant to develop a "hare-brained idea" to prevent biofouling (barnacle and algae buildup) on ships. The U.S. government and private industries spend more than $5.7 billion each year to control biofouling. The simple solution in Brennan's mind was to look to shark's sleek skin

"I thought this crazy idea would be important to stopping bugs from getting on surfaces," he said, "and the U.S. Navy’s bugs are bugs on boats, including bacteria and zoospores, which are the green algae everybody sees. They’re barnacles, tubers, sponges — everything, all kinds of damaging things that need to be kept at bay."

So why sharks? Sharkskin is hydrophobic, and its water-repelling properties have inspired high-performance activewear lines to scuba suits to even armor. Rather than traditional scales, sharks have miniature grooved "teeth" that interlock. These teeth are called dermal scales, and they effectively push water down to reduce drag as a shark swims. Brennan hoped to duplicate that hydrophobic skin with his film. If water can't stick to a surface, Brennan noted, then bacteria cannot grow.

"Without the water, bacteria can’t attach to the surface," he said. "This makes our film exceptionally bacteria-inhibiting. It simply displays the sharkskin pattern that does not get wet. Simple as that."

But how does someone gather a sample of sharkskin from one of the fastest-moving creatures in the ocean? That was Brennan's key concern. One of Brennan's friends specializes in catching, tagging, and releasing sharks. Brennan sent him a dental impression kit, but rather than take a mold of teeth, he asked his friend to take a mold of a sharkskin. 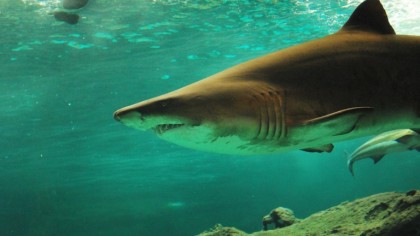 To Brennan's surprise, the idea worked. He then replicated the impression and put it under a microscope to analyze pattern and texture.

"I wasn’t able to do it exactly like a sharkskin," Brennan said, "but I was very close, and it worked! The first time we used it, it stopped the growth of green algae by 85 percent, and all the biologists I worked with were very excited. This led us to trying to fend off all the other bacteria and bugs, and, eventually, to the creation of Sharklet."

Hospitals around the United States are adopting the technology, applying it to hospital beds, remote controls, walls, and interior furniture. Doctors are even applying the film to catheters, hoping to reduce the high infection rates caused by the devices. Roughly 40 percent of all hospital-acquired infections can be traced back to catheters.

Sharklet CEO Mark Spiecker hopes that the technology will save more than money. With over two million people contracting infections in hospitals, he expects the film can save lives.

"I am constantly looking at different organisms and animals for inspiration," he said. "Nature provides so many amazing designs for us to build off of as humans. The possibilities to leverage naturally occurring patterns into innovations to solve common problems are endless.

"That’s why people call me a nerd, because everything I see is a useful topography or pattern. I figure, Mother Nature has figured things out, so I’m going to learn as much as I can from her."