Should We Be Eating Bugs?

With the high cost of meat production, is it time to eat bugs?

Over the past few years, scientists and nutritionists have been increasingly telling anyone who would listen that people around the world needed to start eating insects as a substantial portion of their diet.

The idea hasn’t exactly reached widespread acceptance in the West, where a culture of entomophagy—the formal name for eating insects—never really developed, but that may be changing.

Driven by the needs of addressing the threat of Climate Change and the needs of a quickly growing population, many or giving another look at how insect protein might be a crucial piece of the solution to these and other issues of sustainability.

Benefits of Eating Insects—and the Costs of Passing on Them

The watershed moment in the renewed interest in insect protein came in 2013 when the United Nations issued a 200-page report entitled Edible insects: future prospects for food and feed security. 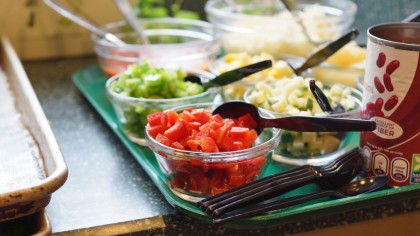 In the report, the current costs of our current global system of livestock production are compared with the prospect of transitioning to a more insect-rich diet.

It isn’t hard to see why one would want to look for an alternative to the mass production of meat that has largely dominated the global food supply for the last half-century.

The mass production of beef, pork, and poultry requires an enormous amount of resources in terms of land, water, and feed. Beef, for example, requires 100 gallons of water to produce as few as 6 grams of beef. That same 100 gallons, meanwhile, can produce as much as 72 grams of cricket protein.

What’s more, insect protein is simply more efficient than traditional livestock sources. In order to produce 1 kg of high-quality protein, on average, chickens require 2.5 kgs of plant protein, pigs require up to 5 kg of plant protein, and cattle require as much as 10 kg.

Meanwhile, crickets can produce 1 kg of high-quality protein with as little as 1.7 kg of plant protein.

This efficiency is compounded when you consider that much of traditional livestock isn’t edible. Chickens and Pigs are only about 55% edible, while only 40% of a cow is edible. A cricket, meanwhile is as much as 80% edible, meaning that not only are they more efficient at converting plant matter to usable protein, they pack in more of it, gram for gram.

Also, many of the 1,900 edible species of insect the UN identifies are located in parts of the world where year-round sources of income are hard to come by, so insect harvesting provides a way for many people to escape from the poverty of subsistence farming.

When the UN put out its report, people took notice and started getting in on the insect protein game.

Greg Sewitz, a co-founder of Exo, a company that produces protein bars that are made with Cricket Flour, was directly inspired by the UN report. A senior at Brown University at the time, Sewitz “was stunned by the realization that the U.S. is one of the only countries with ‘no culture of eating insects.’”

He saw an opportunity and reached out to a friend, a weight-lifter by the name of Gabi Lewis. Enlisting Lewis to come up with a protein bar made with the flour made from ground-up, roasted crickets, they joined the growing ranks of nutritional supplements on the market that utilize cricket or insect flour.

Fellow Cricket-protein brand, Chapul, saw its revenue quadruple from 2014 to 2015 and is expected to expand even further with distribution deals with smaller grocery chains in the United States. The biggest question for this growing market, however, is how to overcome the cultural taboo against eating insects, in any form.

Companies like Exo and Chapul hope that working cricket protein into existing staples, such as protein bars, can serve as an on-ramp for Westerners to get on-board with eating insects.

“Crickets are the gateway bug,” according to Jarrod Goldin, one of the proprietors of Entomo Farms, located in Ontario, Canada, who provides the cricket powder that Exo and Chapul both use for their protein bars. The powder, these companies believe, puts just enough space between the consumer and the insect that it makes the whole thing palatable for a skeptical customer.

Eating Insects at a Distance

Some companies believe that the answer is moving further down the production line to animal feed. A $400 billion a year business, animal feed has been largely dominated by soybeans, land and water intensive crop to produce.

Companies from Cargill to McDonald’s are looking into using insect protein as a source of animal feed for beef, pork, and poultry to create a more sustainable supply chain. Cargill, in particular, is looking into expanding insect-meal for aquaculture, where regulations on fisheries can be more stringent to prevent overfishing.

The regulations on insect-meal for animal consumption still has a ways to go to catch up to where other plant-based or animal-based feeds are currently, given the resources and influence on the side of those who are most interested in exploring insect-based feeds,

We can expect insect-feeds to become a much more common solution in meat production, freeing up vital cropland for other uses.

Insect Protein in the Future

It’s a legitimate question to ask just how much people are going to be willing to adopt insect protein into their diets in the years and decades ahead, but the outlook appears positive.

As several proponents of insect protein point out, it wasn’t all that long ago that Westerners viewed eating raw fish with distrust, if not disgust. Now, you can’t walk five feet in any town in America without stumbling over a California roll. Why not insect protein?

In the end, though, the ultimate factor in our decision to adopt insects into our standard diet might come from without. It might not be much of an option whether we eat insects of not; with Climate Change threatening a lot of our traditional agricultural models, a change might be forced upon us whether we are ready for it or not.