As all of the heats of Olympic swimming have come to a close, you may be elated at how your countries top athletes have done. If you have been following closely, you likely noticed that there are a lot of ties in swimming. The most recent tie was a three-way tie for second place between Michael Phelps, Chad Le Clos, and Laszlo Cseh. A three way tie may seem statistically improbable, but due to the way swimming is timed, and some interesting construction of pools, ties are very common.

Think of significant digits. There comes a point where a digit in an answer is meaningless, or cannot be accurately extracted from input data. Officials in swimming could time down to a thousandths of a second, but there would be no way to accurately ensure that the winner actually won.

Olympic-sized swimming pools are 50 meters in length, and given the fastest a swimmer has ever swam this distance, 1 thousandth of a second in time is equal to 2.39 mm of travel, according to Regressing. The tolerance on an olympic swimming pool according to standards is 3 centimeters in length in variance per lane. You may already be starting to see the problem with timing down to a thousandths of a second.

Given the tolerances and the speed that swimmers swim at, there is statistically no way to ensure that the winning swimmer didn't have a shorter length of pool to swim. 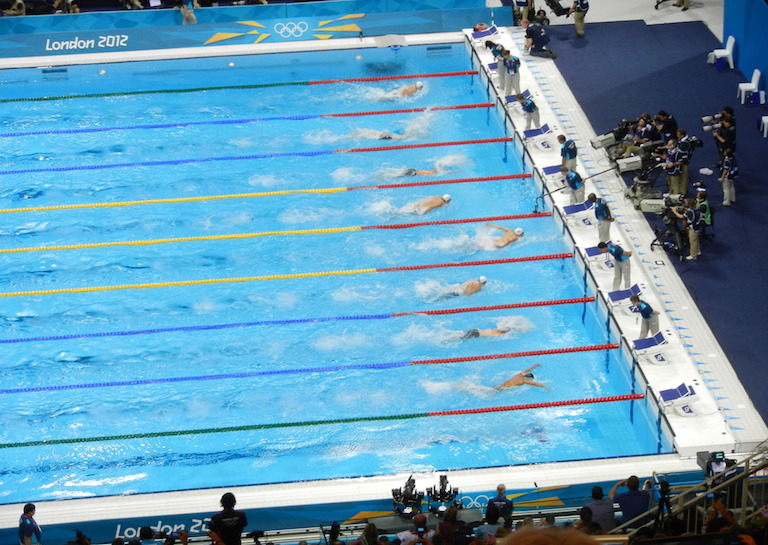 So why then, you may ask, is the tolerance on pools so great that it does not allow for more accurate timing? Well, you could construct a pool to a tolerance tighter than 2.39 mm, but it would cost a lot of money, and take a lot of time to ensure the proper length. So, instead of making every pool builder keep an impossibly small tolerance, the sport of swimming only times down to a hundredth of a second.

You may also be wondering why some other sports measure time down to thousandths as significant digits. In sports where every athlete competes on the exact same track, timing can be done to however accurate the officials can measure. It is only in swimming and other sports where there are lanes or similar but different courses where officials have to adjusting timing to the tolerances of construction.