The Halloween Asteroid is back and will be flying around the planet in 2018.

We do not need any other creepy any more creepy omens, events or coincidences. If you were not aware, in 2015, around everyone favorite scary holiday, a small skull-shaped astroid paid us a visit, flying past the Earth. Perfect for the time of the year, the asteroid caught the public attention for its unusual orbit and all-too-creepy shape. Well, he is back.

The Halloween asteroid or, as it is also called, 2015 TB145 will be passing the earth in the upcoming 2018 year. Almost like if it had a mind of its own, the creepy asteroid seems like wants to come back and pay the earth another close visit. Last time the asteroid paid us a visit it came really close to the Earth, maybe a little too close if you look a the numbers. When TB145 flew by the earth is just barely missed the moon's orbit, flying at 486,000 kilometers per hour.

What made the Asteroid, even more, creepier was the fact that the death shaped asteroid was one of the closest calls to the earth and will be for almost 500 years. The asteroid is a little unpredictable because of its large orbital inclination or simplified a highly tilted orbit.

The Halloween asteroid will not be visiting us this year on Halloween but it will be fly by the earth around late November. But, do worry the asteroid will be flying farther away from us. The flyby will take place about 105 times the distance between Earth and the Moon. The object's weird looks and the even weirder orbit patterns have fascinated researchers. During its last approach, using the various telescopes at their disposal, they were able to collect impressive amounts of information about the asteroid. 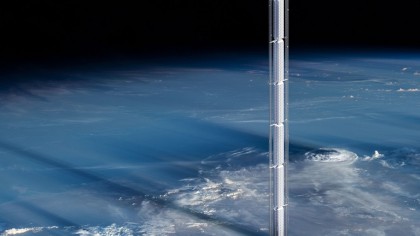 Architects Design a Crazy Skyscraper That Would Hang From an Asteroid

Astrophysicist Pablo Santos Sanz wowed by the Halloween astroids patterns. "The object measures between 625 meters and 700 meters, its shape is a slightly flattened ellipsoid, and its rotation axis was roughly perpendicular to the Earth at the time of its closest proximity," stated Santos after observing the asteroid. Though the asteroid it does share some of the similarities of other asteroids of its size.

It took a while for this asteroid to be discovered, even though its orbiting time has been rather consistent. Yet the shyness of the asteroid is to blame, as the Halloween Asteroid has been spending most of its time floating around Mars. You won't be able to see the asteroid but who knows, maybe the skull looking asteroid is a sign.