The Worlds most Incredible Skydive- Without a parachute!

Jumping from any height more than a couple feet without a form of protection is probably a bad idea. However, jumping from 25,000 feet (7620 meters) without a parachute sounds like a death wish. So how did Skydiver Luke Aikins pull it off (and survive!)?

Jumping more than 600 meters will have no effect on your speed. While physics states things constantly accelerate, that is taken into account without air resistance which sees a person reach terminal velocity after falling from this height. Of course, terminal velocity varies with the size, shape, and density of the object, so slight deviations can occur. At the end of the day though, jumping more than from nearly 8 kilometers up would quite easily see Aikins reach top speed- whether he jumped from half that height would have had no effect. However, by approaching the fall with a sprawled eagle spread, Aikins can increase his air resistance and slightly reduce his terminal velocity, giving a greater chance to survive the landing

How did he Survive the Landing?

Falling from the sky would see much of the gravitational potential energy turned into kinetic, of course with a large portion also lost to air resistance. However, at some point, all that kinetic energy had to be dissipated. This comes in the form of impulse, or change in momentum over time (F=mv/t). Anyone who has slammed the brakes in a car, or fallen off a chair will understand stopping too quickly is rather unpleasant. The more time a collision takes place over, the less force will be experienced in an instant, dissipating it over a longer duration, which is why you would rather be hit with a pillow than a brick. Similarly, Aikins falling at 240 km/h would probably not want to stop instantly.  However, for an incredibly short duration humans can handle up to 30 gs of force (see chart below). 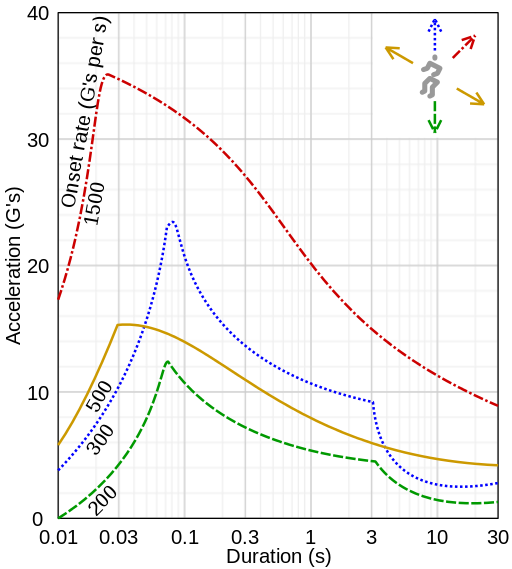 The chart, describing human tolerance of g-force over time demonstrates that for a short duration, humans are rather tolerant to high forces. Traditional skydivers quickly accelerate to terminal velocity before they open their parachute which negatively accelerates them over a few seconds, thus giving a low impulse which results in more comfort. In order to stop using a net, time must be greatly considered.  With this in mind, Aikins and his team precisely engineered a net that provided a low enough impulse that could be survivable. To maintain an acceleration of just 10gs (where most people pass out), the nest must stretch at least 2.3 meters (7.5 feet). Judging from the video (and the fact that he lived), it is apparent they were (fortunately) successful.

Why the Flip at the End?

After Aikins long fall, he quickly flips over to take the force on his back. Falling onto his back provides a more comfortable collision can be much more easily handled by the body. The  cerebellum which sits in the back of your head controls functions such as coordination and balance whereas the front contains the prefrontal cortex which is responsible for being alert and making decisions. Falling backward directs the force onto the cerebellum instead of the prefrontal cortex which enables humans to sustain more acceleration as alertness can be maintained. Not only this, but ligaments such as the arms, legs, and neck have much greater tolerances to bend forwards rather than back, potentially saving Aikins from sprains or worse. It is a similar technique used by net jumpers.

With terminal velocity, impulse, and strategic falling all in mind, Aikins pulled off the seemingly impossible and survived jumping from a plane without a parachute. Despite his survival, we recommend you do not try this at home. 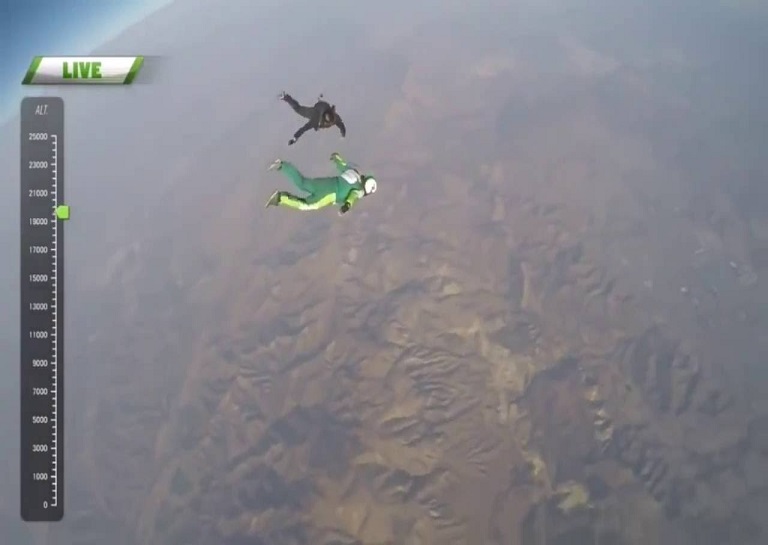 11 Ways to Have a Christmas Party Without Ruining the Environment