'Slaughter-Free' Lab-Grown Steaks Are Produced for the First Time

Another achievement in the lab-grown meat movement comes with the successful creation of a solid steak alternative from Israeli company Aleph Farms.

As part of the growing global efforts to reduce our dependence on what some perceive as the excesses of certain sectors of the meat industry, a surprisingly competitive range of meat-free alternatives have begun to emerge.

The lab-grown meat industry has begun to gain momentum, securing industry leader support, sometimes erupting into debates about how to create space for cell-based meat versus traditional meat for consumers.

Now, scientists at Isreal-based Aleph Farms have successfully produced the first steak--thinly-sliced as well--which is both (1) slaughter-free and (2) completely lab-grown, scoring another victory in the clean meat movement.

Although still in the prototype phase, the meat with the surprisingly realistic look, it will still need to undergo some flavor modifications before it has that signature taste that steak lovers around the world enjoy. As Aleph CEO and founder Didier Toubia reported to Business Insider:

"The smell was great when we cooked it, exactly the same characteristic flavor as a conventional meat cut," adding about the texture, "It was a little bit chewy, same as meat. We saw and felt the fibers when we cut it with a knife."

An Innovative Process Pays Off

The company best sums up its mission with the phrase "leading the slaughter-free meat revolution for a healthier revolution", and most importantly, it has evolved a technology that supports its ambitious aims.

The process that goes into making the environmentally-friendly meat involves the use of four types of cells composing real meat in three dimensions. Below is a video explaining the process in detail:

The company also claims to be growing them in a medium that is free of fetal bovine serum, the rich cow-based liquid that's currently the lab standard for nourishing cells.

Didier and his team at Aleph Farms took on the more difficult task of creating a meat alternative that would be more difficult to replicate than some of the minced meat equivalents, in large part due to the fundamentally unique textural properties of steak.

Open the subject with any meat connoisseur, and you will be bombarded with opinions about the cut, chew properties and level of doneness, among other factors, which go into a good steak. Unlike vegan alternatives, such as patties, a steak is an experience all its own. 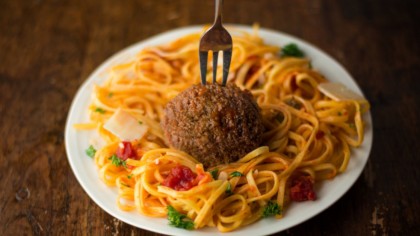 "Making a patty or a sausage from cells cultured outside the animal is challenging enough — imagine how difficult it is to create a whole-muscle steak," Toubia related in a statement."

The creation is also a victory in terms of efficiency. Aleph Farms offers to produce the steaks within a 3-week period at a cost of only 50 USD.

"We're the only company that has the capacity to make fully-textured meat that includes muscle fibers and blood vessels — all the components that provide the necessary structure and connections for the tissue," Toubia also shared with Business Insider in May of this year.

Interesting Engineering will continue to follow developments within this fast-emerging technology.