A new kind of flying robot has been developed that could move rubble in tight spaces in rescue scenarios.

Flying robots that can carry objects 40 times of their own weight and even open doors have been developed in a collaboration between Stanford University and Ecole Polytechnique Federale de Lausanne in Switzerland. Called FlyCroTug the tiny robots have advanced gripping technologies and the ability to move and pull on objects around it.

When working in pairs, two FlyCroTugs can jointly lasso the door handle and heave the door open. The clever bots can adhere themselves to surfaces using adhesives inspired by the feet of geckos and insects.

These sticky ‘hands’ allow the robust to pull objects 40 times their weight, such as door handles, cameras or water bottles. They have great application in rescue situations.

“When you’re a small robot, the world is full of large obstacles,” said Matthew Estrada, a graduate student at Stanford and lead author of a paper on FlyCroTugs, “Combining the aerodynamic forces of our aerial vehicle along with interaction forces that we generate with the attachment mechanisms resulted in something that was very mobile, very forceful and micro as well.”

The tiny size of the robots means they are perfect for slipping through tight, confined spaces such as those found in rescue situations like collapsed buildings. By holding tightly onto nearby surfaces the FlyCroTugs could move debris or even people into better position.

The robots were developed in the labs of Mark Cutkosky, the Fletcher Jones Chair in the School of Engineering at Stanford University. Similar to Cutkosky's previous work the robots take heavy cues from nature.

Initially, the researchers looked at wasps as an example of a small agile flying animal that was able to move large loads. “Wasps can fly rapidly to a piece of food, and then if the thing’s too heavy to take off with, they drag it along the ground. So this was sort of the beginning inspiration for the approach we took,”said Cutkosky, who is a co-author of the paper.

Wasps have several different attachment options for carrying food and other loads and the researchers added this feature to their robots too. For smooth surfaces, the FlyCroTugs can utilize their sticky pads, designed like a gecko's foot that sticks by creating intermolecular forces between the adhesive and the surface. 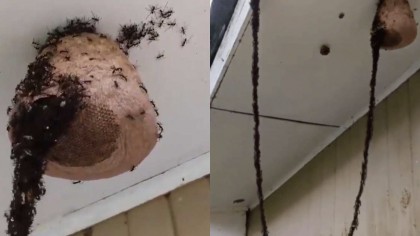 For rough surfaces, the flying vehicles employ 32 micro-spines, a series of fishhook-like metal spines that can individually latch onto small pits in a surface. “People tend to think of drones as machines that fly and observe the world, but flying insects do many other things – such as walking, climbing, grasping, building – and social insects can even cooperate to multiply forces,” said Dario Floreano, who was senior author on the paper.

“With this work, we show that small drones capable of anchoring to the environment and collaborating with fellow drones can perform tasks typically assigned to humanoid robots or much larger machines.” The research was published on Oct. 25 in Science Robotics.

This Uncrushable Beetle Withstands 39,000 Times of Its Weight

New Project to Clear the Seabed of Plastic with Autonomous Robots

68% of Workers Prefer Robots over Managers to Discuss Mental Health