Smartphone Breathalyzer that Fits in your Pocket 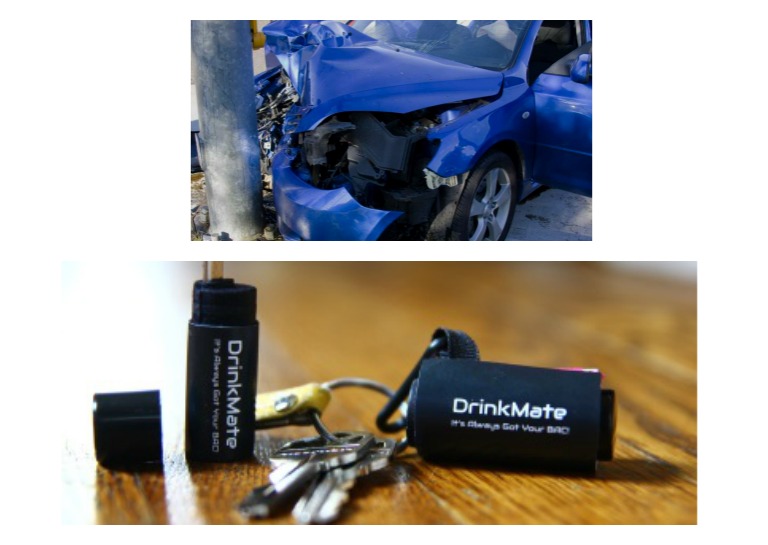 The DrinkMate Breathalyzer is the smallest breathalyzer in the world, and it could help save your life.

Last year, 1.2 million Americans were arrested for intoxicated driving. In 2014 alone 9,967 people were killed in alcohol-impaired driving crashes, accounting for a shocking one-third (31%) of all traffic-related deaths in the United States. According to NCADD,

"On average, two in three people will be involved in a drunk driving crash in their lifetime"

In 2012, 29.1 million people admitted to driving inebriated- that is more than the entire population of Texas.

Drinking and driving is a game, a game in which there is no winner. Rather, it is gambling- with your life on the line, and the only bankruptcy to declare is your own mortality. Drinking and driving is not joke. Unfortunately, millions of people every year under the false impression they have the cognitive ability to drive while impaired get behind the wheel, many of which will never be able to drive again. An integral problem is that many people do not recognize they are too impaired to drive. Being under the impression of alcohol only compliments the decision to make the absolute wrong one.

However, now, a company who once started on Kickstarter devised an incredibly small key chain breathalyzer to take the guesswork when it comes to making the incredibly important decision of whether you can drive or not. The device does not require a battery- it simply contents to your phone and in 7 seconds can analyze the blood alcohol content (BAC), determining if you are capable of driving. The device is now available for just US $35.

The function of the device is simple:

The engineers behind the project decided to re-envision the breathalyzer to bring something so small and unique, people could take a Breathalyzer anywhere with them. The device makes use of a small, innovative inlet that redirects flow over a sensor that is able to make a reading with an accuracy of +/- 0.01% BAC at a BAC of 0.02%.

The inlet does not require a mouthpiece and can  slowdown the flow of air to give more precise readings with a greater range of air velocities, making the device more functional and useful than other products. The system is backed and validated by Lifeloc Technologies, a leader in breathalyzer testing and calibration.

The device is worth just $35, where a life remains priceless. The DrinkMate portable breathalyzer is a game changing device that every driver should use anytime after consuming any amount of alcohol. When risking your life, there are no second chances. Drinking and driving could see you end up in jail, the hospital, or worse.

If you are interested in learning more about the DrinkMate, or would like to purchase the device, you can find more information on their website (linked).

SEE ALSO: What Humans Would Look Life if They Evolved to Survive Car Accidents