The future of virtual reality looks very bright, thanks to large-scale research and development efforts, with work on introducing the senses of taste and smell being identified as the next big challenge.

Over the years, the fantasy of experiencing the smell of a tasty dish seen in a movie or on a cooking show has occupied the minds of many of us growing up. But what if something like a 21st century translation of smell-o-vision could actually be achieved?

Some researchers are beginning to shift the limits as well as traditional concepts behind virtual reality (VR), which overwhelmingly focus on enhancing experiences related to sound and sight. Though the advancements in haptics-supported technology are undeniable, two exciting new areas of VR-development—those that stimulate smell and taste receptors—are also experiencing great interest and generating an important body of research.

Benjy Li, Stanford University Postdoctoral Researcher who works with the university’s Virtual Human Interaction Lab, sizes up the situation: "Sight and sound have been the staple of VR environments," elaborating on future developments, “Haptic feedback is starting to allow for basic touch, but the next radical evolution in VR could actually come via your nose (and/or mouth).”

Contraptions that seek to add olfactory stimuli to VR experiences, in a more nuanced way, have been popping up more and more in recent years. The Japan-based Nakamoto Laboratory developed a “palm-sized olfactory display” called the Oculus Rift. Though a bit cumbersome to put on, the gear fits snuggly just over the bridge of the nose, leaving the lower half of the face exposed. It works by bombarding atomized liquids with acoustic waves, and in this way the unpleasant smells travel up to your nose.

An interesting feature of the device is it’s ability to vaporize a number of liquids simultaneously, and also in different concentrations. What this means is that essentially a basic group of smells can be created, and potentially combined to make thousands of permutations.

The Advent of Consciousness-Altering Scents

A “huge amount of data are required to establish odor components [of different smells]. We can collect them to some degree but it is not so easy,” says Takamichi Nakamoto, who is head of the lab at the Tokyo Institute of Technology, where the device was created.

Another promising area in VR is the use of scents to alter a person’s response to a smell or combination of smells: “Consciousness-altering smells, for example the smell of fear present in the sweat of someone very afraid or scared, are complex mixtures and no-one knows the composition and they will not be synthetically recreated in a hurry,” shares Tim Jacob, a smell expert at Cardiff University. “Smell is not like vision where from a primary color palette you can mix all colors.”

The fact that we all experience smells, and in turn store them in our memory, in intrinsically different ways, creates a greater challenge for scientists. The results of an experiment that looked at this area, titled “Exposure to an unpleasant odour increases the sense of Presence in virtual reality,” were published in the June 2017 edition of the Virtual Reality journal. In the experiment, 20 participants were asked to locate a murderer’s knife in a VR house. However, when they entered the kitchen, each of them was exposed to one of three types of olfactory stimuli: a pleasant odor, ambient air, or an unpleasant odor (in this case, a urine smell). What the researchers found was that the last smell had a presence-inducing effect. 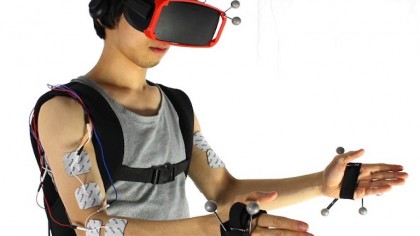 More interesting, however, was the vastly different ways participants identified the unpleasant odor. Some perceived it as fish, some as garbage, or even the body of the fictional killer. Most telling was the fact that some identified it positively, due to the fact that happy memories were evoked: “We had one participant who said when they were young, they drove to school past a farm, and that’s what it smelled like,” says Oliver Baus, University of Quebec researcher and study-coauthor.

Without dedicated efforts to seriously develop this area of virtual reality, the full emotional, and visceral, reactions that developers and researchers envision for the technology will not develop to its full potential. It will require striking out in bold directions, beyond the area of stimulating responses to food, and combining complex and sophisticated approaches.