Exoskeletons of various sizes and shapes enjoy growing popularity in the last few years. Some are created with the purpose to increase mobility and effectiveness of the soldiers, while others are purposed to help disabled people have normal life. Similar feature for all of them is that they utilize rigid frame made of aluminum or other solid materials.
Yong-Lae Park, an assistant professor of robotics at Carnegie Mellon University, claims that he invented a soft, wearable device which could support the rehabilitation of patients with legs injured below the knee level. The device is made of soft plastic and composite material and recreates muscle, tendon and ligament functioning and reduces pressure over the injured area. 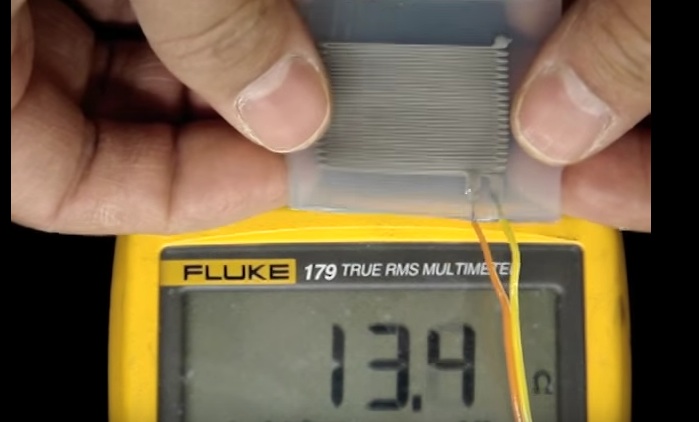 Professor Park collaborated with scientists at the University of Southern California, MIT and Harvard University. BioSensics, a Massachusetts-based company that works in the field of wearable body sensors, was also involved in the project. According to Park, the same approach could be applied to development of devices for rehabilitation of the other body limbs and joints. Or even to create entire soft exoskeleton capable of increasing wearer’s strength and speed. This sounds close to some video games and futuristic movies, right?
The device is comprised also of pneumatic artificial muscles (PAMs), lightweight sensors and specially developed control software which allows for the system to recreate the natural motion of the ankle. The project was reported to the Bioinspiration & Biomimetics journal.
The device would help to people with different disorders of the foot and ankle related to cerebral palsy, multiple sclerosis, and stroke or amyotrophic lateral sclerosis. Drop foot should be added to this list, the forefoot drops due to weakness or paralysis. Equinus belongs to the same category of disorders, which is characterized by limitation of the ankle bending ability.

https://www.youtube.com/watch?v=IbXRiTbuDvY
The ankle braces that are in use now can support the gait, but their longer usage may cause muscle atrophy because it limits the usage of some leg muscles. On the other side active devices are able to effectively support the gait and support the neuromuscular activity along with that. Also, most of the rigid exoskeletons have just a single pivot point. Opposing to this, the ankle is capable of moving in much more directions.
‘The limitation of a traditional exoskeleton is that it limits the natural degrees of freedom of the body,’ said Park.
The ankle motion is controlled generally by four muscles, three are located in the foreleg and the fourth one is in the back. The device has four PAMs that correspond to those muscles, which allows for sagittal motion angle of 27 degrees. This is considered sufficient for normal walking.
Sensors play key role in the device functioning. They consist of artificial skin and rubber layers comprised of long micro-tubes. The micro-tubes are filled with liquid metal alloy and are in the core of the rubber layer sensitivity. When the rubber is stretched or pressed, the tubes change their shape which causes changes in the electrical resistance of the alloy.
The next challenge that is in front of the researchers is to make the device lighter and more comfortable. This will be done generally by development of lighter PAMs.