Researchers at MIT, CSAIL and Harvard’s Wyss Institute have developed a way to increase the power of soft robots. An artificial muscle has been developed that uses a complex folded origami design to give it strength.

Robotics engineers have been working on ways to make robots lighter and safer for years. This field of research called ‘soft robotics’ has created some incredible creatures in the past but now these squishy bots are getting a big upgrade thanks to a development by researchers at MIT, CSAIL and Harvard’s Wyss Institute who have developed a way of adding soft muscle mass. The research has been published in a paper titled, Fluid-driven origami-inspired artificial muscles which describes how these new muscles can help small robots pack a big punch.

The ‘muscles’ are actually made of a sealed bag filled with either water or air. The bag is constructed from a folded origami design and when the pressure in the bag is reduced the structure contracts much like a human muscle does. But unlike its human inventors, this muscle has huge strength to weight capabilities; a single origami muscle can lift 1,000 times its own weight.

Gentle robots are now strong too

Professor Daniela Rus, CSAIL director and lead author of the paper describes the research: “Soft robots have so much potential, but up until now, one of the limitations has been payloads. [They’re] very safe, very gentle, but not good for lifting heavy objects. This new approach allows us to make strong and soft robots.” These mighty strong and mighty soft robots have a huge range of applications. But this new research is mainly targeting warehouses and logistic operations. An industry that has been a supporter of robotics and AI from day one. While many robots have been developed for moving packages around distribution centers, unusually shaped packages still pose a big problem. This is sometimes solved by robots having suckers that grip onto unusual shapes or by others using learning to inform the robot how to best approach each individual package. The new muscly soft robots can simply adapt to the shape of the package in much the same way a human hand can adjust to large, small and odd shaped objects.

Origami robots can be cheap to build and repair

While the soft muscles are a big leap forward for soft robotics the design still has its drawbacks. 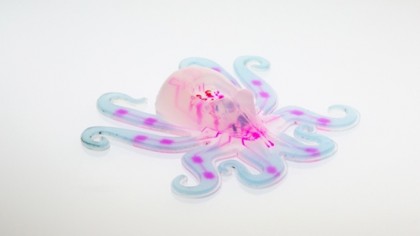 Soft Robotics and the Materials That Could Revolutionize the Field

The soft devices are not as easily controlled or as reprogrammable as their traditional hard counterparts. They really only have one movement pattern that can’t be changed. “You compose distinct movement patterns inside the skeleton that define how the system as a whole moves,” explains Rus. The good thing is that by using algorithms we can design and construct an origami shape for almost any action. Which is useful for assembly lines where the action may require a twist or bend. The relative simplicity of the robots also means they don’t require complicated electronic control systems. The robots can be cheaply made and then quickly replaced or repaired. The robots are magical to watch combining both the awe of functional robotics with the beauty and complexity of paper origami. Rus describes how the origami idea continues to inspire: “I started working with origami many years ago because I was interested in making modular robots that have programmable properties; I wanted to create programmable matter" she says, “Origami has this beautiful universality.”

Via: PNAS, The Verge, MIT CSAIL