Solar PV: Why is London trailing behind the rest of the UK?

A recently released Greenpeace report found that London could potentially deliver a tenfold increase in solar power over the next ten years, ending its record as the worst performing city in the UK for solar power installation. 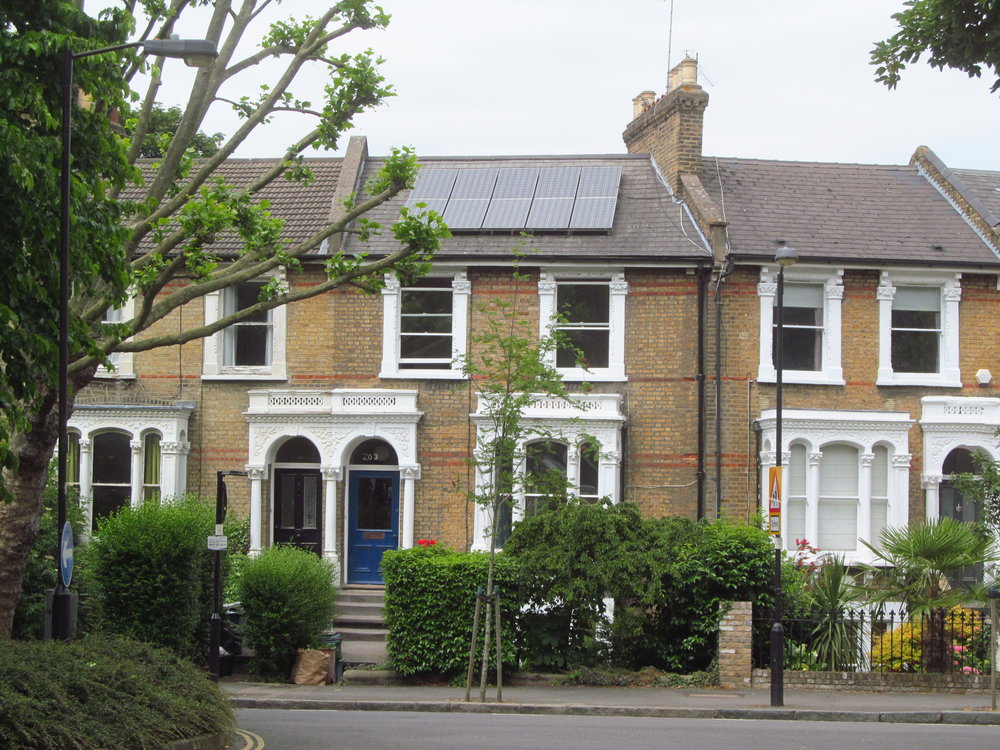 Last month, Greenpeace released a report showing how far behind London, the supposedly progressive capital of the UK, is with regard to solar PV installation. The report found that the city could potentially deliver a tenfold increase in solar power over the next ten years, ending its record as the worst performing city in the UK for solar power installation. At present, only 0.5 percent of the city’s 3.4 million homes use solar power, trailing way behind the rest of the country in solar installation.

Greenpeace is now calling on all four London Mayoral candidates to produce a detailed plan setting out how to address the city’s woeful solar power sector. Ideas suggested by the pressure group include establishing a ‘London Solar Task Force’ to gather together communities, investors and industry groups with the aim of loaning out roof space for community energy projects. Greenpeace has also suggested green bonds as a means of financing solar projects in the capital and establishing a Feed-in Tariff to restore some of the incentives cut by central government last year.

The group claims that measures such as these could increase solar power generation across London tenfold by 2025, representing solar installations on around 200,000 London rooftops at a cost of 0.3 percent of the amount needed through to 2050 to finance the city’s growing energy demand.

“London is a world leader in innovation, yet it’s missing out on the energy revolution of the century” said Greenpeace UK energy campaigner Barbara Stoll, speaking to The Guardian. “From rooftop space to business know-how and grassroots enthusiasm, the capital has the complete toolkit to unleash a solar revolution that can generate jobs, investments, clean and ever cheaper energy for tens of thousands of Londoners. What’s long been missing is the political will to make it happen. London badly needs solar champions, and we want the next mayor to be one.”

But why is it that the city fell so far behind the rest of the country in the first place?

Ray Noble, solar adviser at the Renewable Energy Association (REA), speaking to Guardian environment editor Adam Vaughan argues that the city’s transient and flighty population is one reason for low take-up, in that people just don’t hang around for long enough for the payback to kick in. The city’s increasingly super-rich population just don’t care enough about solar energy to warrant installing it, or even about reducing their energy bills in general. Mr Noble points out that many houses in the city are either rented or purchased specifically with a view to moving on in the near future, while those who do own their own houses just don’t care. 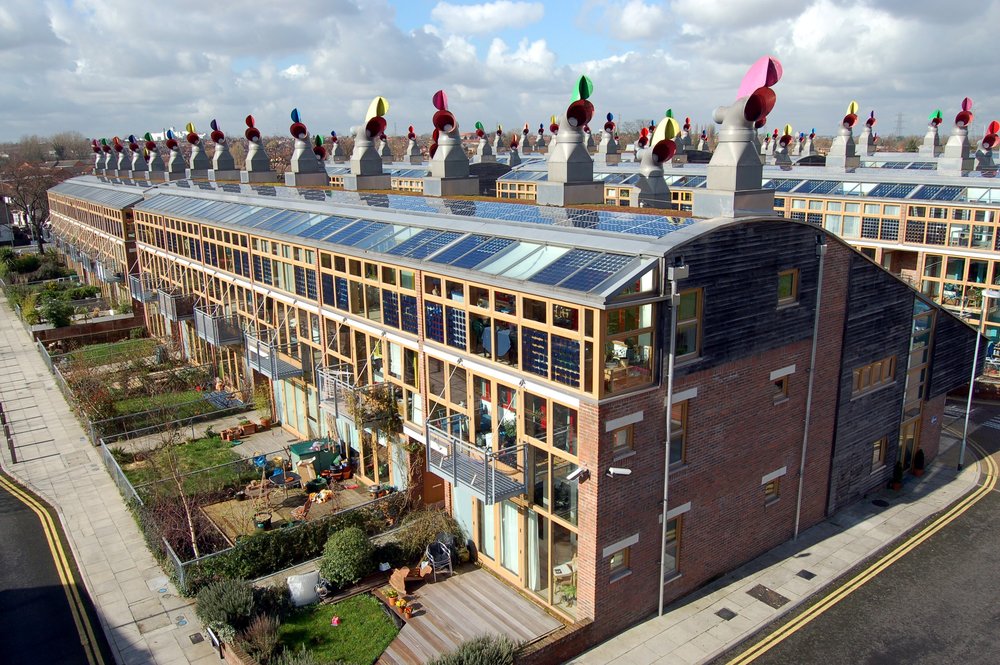 Solar panels on the BedZED development in the London Borough of Sutton [Image Source: Wikimedia Commons]

Managing Director of Southern Solar, Howard Johns, supplies another explanation. He argues that the city’s housing stock is to blame, because of the small roof space. The buildings also tend to be fairly tall and that means the cost of scaffolding can be prohibitive. On top of that, you have converted lofts, roof windows, dormers, aerials and chimneys which further reduce the amount of available space.

However, Leonie Greene of the Solar Trade Association (STA) just isn’t buying that. She says that the city is ideal for solar given that the population is generally well-educated and politically aware, particularly when it comes to green issues.

Jenny Jones of the Green Party believes a lackadaisical attitude to solar on the part of London Mayor Boris Johnson is the main reason why solar hasn’t taken off in London. She believes that he should have pushed harder for solar adoption. This is countered by Matthew Pencharz, Johnson’s environment adviser, who shares Howard John’s view that it is more to do with tall buildings and not enough roof space, as well as the various conservation areas in the city where solar installation is a complex issue. There is also the shadow effect created by tall buildings to take into account.

An analysis of the situation by the London Assembly Environment Committee in 2015 supported this view, while also stating that they do not provide an entirely satisfactory explanation. The STA have also argued that government incentive schemes, such as the Renewables Obligation (RO) and the Feed-in Tariff (FiT) have tended to benefit large solar farms rather than rooftop solar, with the result that commercial and industrial rooftop solar accounts for only five percent of all rooftop solar installed in the UK to date, while in Europe commercial and industrial rooftop solar dominates the market. Greenpeace argues that although the Mayor doesn’t have much control over the city’s existing energy infrastructure, the planning process does give him the ability to influence energy strategies adopted by new developments and housing projects supported by the Mayor’s investment programs.

The Mayor can also drive environmental behavior by engaging, coordinating and convening green initiatives in the city and supporting best practice across the GLA group’s London estate, which includes brownfield sites owned by the Mayor. He also has the ability to use part of his annual budget, in excess of £16 billion, to fund particular programs, such as the RE:NEW and RE:FIT schemes and decentralized energy programs. Sustainable procurement is another way in which the Mayor can drive sustainable development.

A report published by Jenny Jones in 2014 argued that the Mayor could drive forward a number of initiatives to increase solar take-up in London.

For example, the expansion of small commercial and community installations could see panels being installed on the rooftops of London’s commercial and industrial businesses, supermarkets, car parks, schools, transport and public buildings. 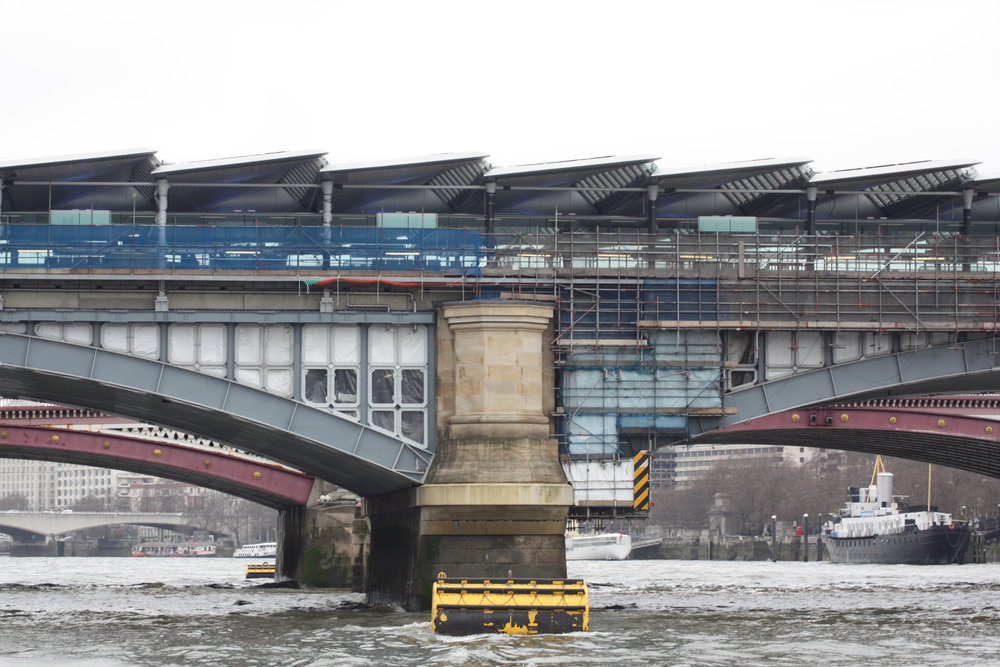 Jones argues that the Mayor could also establish a high-level working group, along the lines of central governments solar strategy, with the aim of producing a solar action plan with capacity targets. A unit based in the GLA could provide support to community solar schemes and commercial deployment, helping to identify potential sites, developing a database of potential opportunities and supporting brokerage with rooftop owners, investors, suppliers and installers. The Mayor could introduce wider regulation and provide support for financial planning.

The Mayor’s electricity ‘License Lite’ could be used to buy electricity from solar panel arrays, selling it on to public organisations such as Transport for London (TfL) and local councils. This in turn would create a guaranteed market, thereby removing risk. The Mayor could work with UK Power Networks, the current power operator for London, to understand where and in what circumstances solar PV could benefit the grid.

Transport for London could utilize advertising space to promote solar. Employment, training and apprenticeship schemes could help to bring more people into the sector and the GLA could support the installation of solar on major infrastructure programs such as Crossrail. There could be low carbon innovation competitions and pension schemes, the London Green Fund, crowd funding platforms and other investors could help to bring money into the sector.

In short, despite the various challenges, it is probably true that the Mayor could have done more to promote solar in London than he has thus far. In which case, it will be very interesting indeed to see what ideas and initiatives the new Mayoral candidates bring to the table. Perhaps London can still turn itself around.