Solar System Has a Tail, Just Like a Comet

IBEX, which stands for Interstellar Boundary Explorer, observed for the first time this four-leaf clover shaped structure. Such tails were spotted after other stars, but it has not been easy to see if our Sun leaves a tail behind. This situation is due to the fact that the particles that form the tail do not shine and they could not be observed with conventional telescopes. 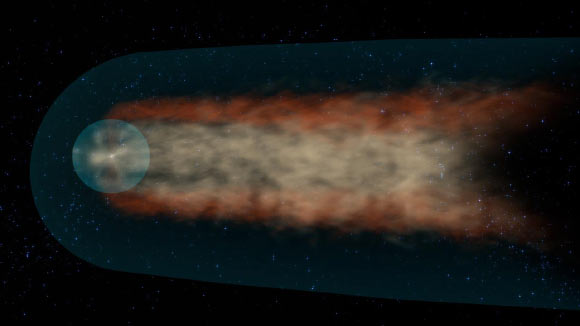 The scientific team behind IBEX showed a tail with a combination of fast and slow moving particles, based on images from 3 years ago. Two lateral leaves of the clover consist of slower particles, the leaves from above and below are formed by faster particles. It is considered that such shape is due to the fact that our star has been sending out faster solar wind near its poles and slower wind near its equator during the last few years. This common pattern matches correctly to the solar activity cycle which is 11 years long.

The charged solar particles are pushed into a different direction in order to align with the magnetic fields from the local galaxy because of the solar magnetic influence, which is indicated by the fact that the entire shape is slightly rotated. This comes to show us that the shape isn’t perfectly aligned with the Solar System.

IBEX makes his images by a technique called Energetic Neutral Atom Imaging, which measures the neutral particles created by collisions at the border of our planetary system. It relies on the fact that the paths of neutral particles are not affected by the solar magnetic field and they travel in a straight line from the place of collision to IBEX. So, observing the direction from which the neutral particles arrived could tell us what happens in these distant areas.

The scientists consider that the tail probably disintegrates and fades away along with increasing of the distance. In order to improve and enrich our knowledge about the heliotail, the team is testing their current virtual simulations vs. the new information.

A paper describing the heliotail was published in the edition of Astrophysical Journal from July 10th, 2013.