This mountain is located on the fourth planet from the Sun - Mars. It is called Olympus Mons (Mount Olympus in Latin) and is almost 22 km (14 miles) tall, which makes it the highest known mountain in the Solar System. For comparison, the tallest mount on Earth is Everest with height of 8848m (29 029 ft), or nearly 3 times shorter than Olympus Mons. 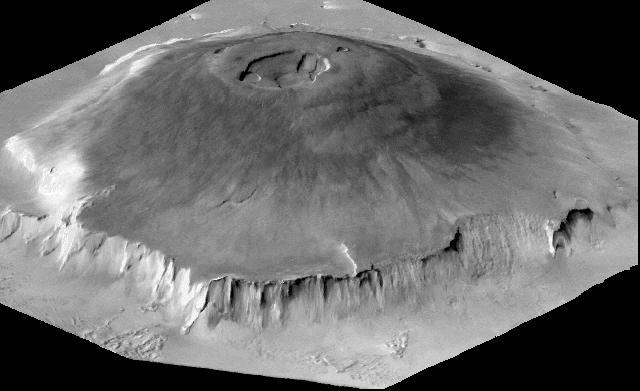 Olympus Mons is a shield volcano, which means a volcano almost entirely made of fluid lava flows. It's creation is considered to be in the Amazonian period, up to 3 mln years ago. On the Earth we can sea such thing on a smaller scale - Hawaiian Islands. These natural formations are a result of many thousands of basaltic lava flows that poured from volcanic vents through a long period of time.  The Olympus Mons reached such size because the tectonic plates on the "red planet" are mainly not mobile. The cortex of Mars remains fixed over a stationary hotspot, and a volcano can continue to erupt lava until it reaches such unbelievable height.

Due to the size of Olympus Mons and its shallow slopes (the average slope on the mount's flanks is only 5 degrees), an observer standing on the Martian surface would be unable to see the entire profile of the volcano, even from a great distance. The curvature of the planet and the volcano itself would obscure such a synoptic view. Similarly, an observer near the summit would be unaware of standing on a high mountain, as the slope of the volcano would extend beyond the horizon, a mere 3 kilometers away.

Putting It All Together: The Main Parts of a Solar PV System

The Life and Death of Our Solar System: The Stardust Genesis