Infamous Al-Shabaab terrorist group announced that they would ban using plastic bags as the plastics were a serious threat to nature and humanity.

By  Shelby Rogers
Jul 08, 2018
A group of Al-Shabaab fighters lay down their arms in September 2012 AMISOM Public Information/Wikipedia Creative Commons

A prominent terrorist organization is making environmental headlines rather than the dangerous political ones often associated with them. Al-Shabaab, a terrorist group based out of Somalia with ties to al-Qaeda, reportedly banned the use of single-use plastic bags.

In what many have pointed out as ironic, the terrorist group made the ban because plastic bags are "a serious threat to the well-being of both humans and animals," according to the BBC.

However, none of this takes away the fact that Al-Shabaab militants have been accused of and connected to the deaths of thousands of people. They've been on the global watch list for over a decade. The deaths that occurred at the hands of these terrorists include arranging hotel bombings, truck bombings, and stoning a woman to death, according to media sources. In 2017, the terrorist organization was associated with a truck bomb that killed more than 300 people in Somalia's capital of Mogadishu in October.

A leader of the organization announced the environmentally-friendly policy on a Jihadist radio network show last week. He was unclear as to how the rule would be enforced. No one knows how Al-Shabaab's leaders will control the use of plastic bags and, worse yet, what the punishment for violating that rule will be. Given the group's history, one can assume an extreme punishment wouldn't be worth the risk.

This is also not unlike what the United States military discovered after raiding Osama bin Laden's hideout in 2011. They uncovered a letter that urged world leaders -- specifically then-President Barack Obama -- to take the globe in a different and more protective direction. Bin Laden even used the word "catastrophic" when describing the problem of global warming and the state of the environment.

Other Fights Against Plastic Bags Around the World

While this might be one of the most unexpected groups to denounce the use of plastic bags, Al-Shabaab is not the first to ban the common plastics. In Somalia's neighboring country of Kenya, a high court recently placed a $38,000 fine or four years of jail time on anyone who used plastic bags. At the time of this writing, it's the harshest ban on plastic bags in the world from a uniform, governmental level. 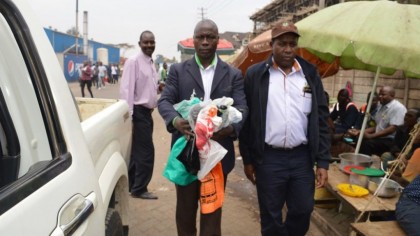 This is the third time Kenya has instituted a ban on plastics. The ban doesn't just include usage; it includes manufacturing and importing the popular merchandise tool.

In Africa, over 40 countries have created similar laws largely aimed at manufacturers and retail outlets.