Some U.K. Water Companies Use Divining Rods and 'Magic' to Find Pipes

An Oxford biology student took to Twitter to ask her local water company if they still used the antiquated practice of dowsing rods to find water. She was surprised by their confirmation.

An evolutionary biology student accidentally stumbled upon one of the coolest stories recently -- that some UK water companies still rely on "magic" to find pipes. Rather than use all the science-based tools at their disposal in 2017, the companies are using dowsing rods dating back to the 18th century and earlier.

Sally Le Page is an evolutionary biology student at the University of Oxford with a passion for making YouTube videos. In a recent piece published to Medium, Le Page got 10 out of 12 of the UK's biggest water companies to openly admit to using divining rods.

To get a modern-day explanation of dowsing rods, check out this video from ETprepper below:

Le Page said she stumbled upon the story when a Severn Trent technician showed up at her parents' house and walked around with "bent tent pegs" to find an existing mains water pipe. Naturally curious to see if the company knew that a tech was using nontraditional methods, Le Page tweeted at Severn Trent. She was not expecting their response.

We've found that some of the older methods are just as effective than the new ones, but we do use drones as well, and now satellites. You can find more information here: https://t.co/zQKlQGl6no

And when challenged by other Twitter users, the company reaffirmed their usage rather than outright denying the practice.

"That’s Severn Trent there, a FTSE 100, state-owned water authority that supply about 4.5 million households in the UK, repeatedly confirming that their technicians own and use divining rods," Le Page noted.

That sparked other Twitter users asking their own water companies if divining rods were an option for finding water pipes. And, too much of their surprise, nearly all of the companies owned up to it. (Yorkshire Water has our favorite response.)

Hi @domneill, although few and far between, some of our techs still use them! But they are only used to detect pipework and voids that may be caused by bursts or collapses! pic.twitter.com/UueOG3zj9U

Le Page had some very strong thoughts after noting that 10 out of 12 major UK water companies still used the practice.

"You could just laugh this off. Isn’t it a bit silly that big companies are still using magic to do their jobs! Except if they get it wrong, that could mean the difference between an entire town having safe drinking water or not," she wrote. "If they use divining rods to decide that there isn’t a pipe underneath and so it’s safe to dig there, they could rupture the mains water supply for thousands of people. Not to mention the cost of sending out a “trained” technician to examine a site for several hours, only to get no valuable information. Money that comes from the UK homeowners who have no choice over which water company to use."

"Maybe it's time to leave the magic and divination to Harry Potter," she concluded.

About dowsing aka "water witching"

But what is water dowsing? How did it get its start, and does it actually 'work'?

Water dowsing is when one takes two L-shaped "divining rods" and hold them parallel to each other in opposite hands. When one walks over water underground, lore says that the rods will cross. The first instance of using divining rods dates back nearly 450 years ago, in an era when the practice was associated with witchcraft. (Hence, a common nickname for dowsing is "water witching.") 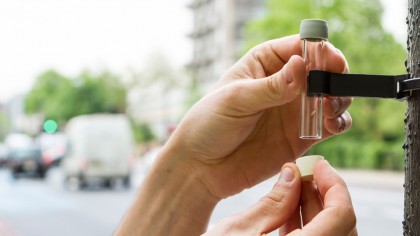 The science behind the pseudoscience can be traced back to an effect known as the ideomotor effect. It's the same 'mysterious force' that pushes someone's hands to an answer on a Ouija board. It's what happens when thinking of something either consciously or subconsciously triggers a response from your body. The ideomotor effect results from micromovements in the body culminating on one another and convincing the practitioner that they're not moving at all.

There's plenty of scientific proof detailing the ideomotor effect, and there's a lot of technological improvements more efficient than dowsing. However, it seems like some methods are simply too good to stop using.