Someone Put a Ring on It: New Research Reveals Saturn Was Once Ringless

The brave almost-heroic death plunge of NASA's Cassini spacecraft has resulted in some interesting measurements of Saturn's recently acquired rings.

By  Loukia Papadopoulos
Jan 21, 2019
University of California, Berkeley through EurekAlert!

You may remember NASA's Cassini spacecraft. The 20-year-old craft made a sad but majestic finale last year when it slammed into Saturn's atmosphere.

However, before its brave almost-heroic death plunge, the craft coasted between the planet and its rings acting as a gravity probe capable of sending back much-needed space data.

Now, it seems even the measurements of its final trajectory have produced fruitful revelations about Saturn, including the fact that the planet did not always have rings. 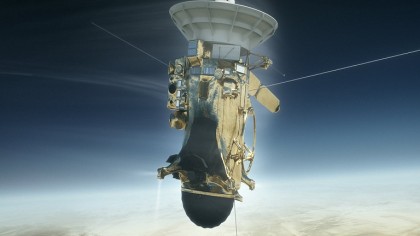 Scientists have used this last information to make the first accurate estimate of the amount of material in the planet's rings, and it is about 40 percent of the mass of Saturn's moon Mimas. Mimas is already 2,000 times smaller than Earth's moon.

What this means is that the rings are new additions to the majestic planet, having originated less than 100 million years ago and perhaps as recently as 10 million years ago. And that revelation goes against some long-held beliefs about the far away planet.

"The first time I looked at the data I didn't believe it, because I trusted our models and it took a while to sink in that there was some effect that changed the gravity field that we had not considered," said Burkhard Militzer, a professor of earth and planetary science at the University of California, Berkeley, who models planetary interiors.

"That turned out to be massive flows in the atmosphere at least 9,000 kilometers deep around the equatorial region. We thought preliminarily that these clouds were like clouds on Earth, which are confined to a thin layer and contain almost no mass. But on Saturn, they are really massive."

And there is more

The scientists were also able to calculate the rotation speeds of Saturn's surface clouds, estimating that the deeper layer takes 9 minutes longer to rotate than do the cloud tops at the equator. These were found to turn around the planet once every 10 hours, 33 minutes.

"The discovery of deeply rotating layers is a surprising revelation about the internal structure of the planet," said Cassini project scientist Linda Spilker of NASA's Jet Propulsion Laboratory in Pasadena, California.

"The question is what causes the more rapidly rotating part of the atmosphere to go so deep and what does that tell us about Saturn's interior."

As happy as the scientists were to make such discoveries, they were also quick to point out that they were the outcome of Cassini's destruction.

"These measurements were only possible because Cassini flew so close to the surface in its final hours," Militzer said. "It was a classic, spectacular way to end the mission." We agree!