Sony is bringing bak its iconic robot dog Aibo and he's had a makeover. 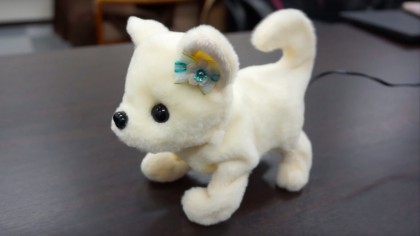 This new model has the ability to "form an emotional bond with members of the household while providing them with love, affection, and the joy of nurturing and raising a companion,” claims Sony. It uses ultra-compact actuators which allow the dog’s body to move along 22 axes.

Unlike its predecessors, this version of Aibo is all about the eyes; the new robot dog features two OLED panels to show a range of expressions and a rounded form that even shows physical signs of body-temperature changes. It also has a camera in the nose that can snap pictures.

The ivory-white puppy is a 30-centimeter plastic dog with droopy black ears and a tail that wags. There is no specific breed referenced, but it does resemble a terrier. Also, thanks to an array of sensors, cameras, microphones and a connection to the cloud, a custom personality can be developed over time, meaning that no two Aibo's are the same. The dog can recognize its owner, run over to them and notice smiles and words of praise. It also enjoys the colour pink.

Probably the most startling aspect of this tiny robot is it’s advanced actuator technology, allowing it to move more seamlessly and better mimic a real canine.

“Aibo recognizes spaces as it walks around the room, detecting obstacles to avoid and even figuring out the shortest distances to different locations,” says the website.

The newest addition to the Sony robot family will go on sale in January for 198,000 yen (£1,306) in Japan, with foreign sales being evaluated. Aibo also requires a subscription, at 2,980 yen a month (about $26) for a minimum of three years. This gives you Wi-Fi and LTE connectivity, cloud backup, and access to the accompanying app’s features. Also for 2,980 yen, Sony is selling a bone accessory called “Aibone," and yes, it's pink.

Arguably, Sony was the first to put entertainment robots like Aibo onto the market in the late nineties.

They sold its first batch of 3,000 dogs in 20 minutes and eventually shipped 150,000 dogs within Japan before ending production seven years later after competition got a little too steep from other manufacturers.

But Aibo made its mark during its time. The dog was used in multiple movies, music videos, and advertising campaigns and went through numerous model generations. It wasn’t until the third generation that WiFi was available with Aibo. Esteemed university Carnegie Mellon even offered an AIBO-centred robotics course.

“It was a difficult decision to stop the project in 2006, but we continued development in AI and robotics,” chief executive Kazuo Hirai said at a news briefing, as reported by The Guardian. “I asked our engineers a year and a half ago to develop Aibo because I strongly believe robots capable of building loving relationships with people help realize Sony’s mission (to inspire).”

Since then Sony began investing in AI startups like Cogitai, who focus on autonomous technology that learns continuously from interaction with the outside world. Something the current Aibo is able to do.

Would you buy the new robot dog from Sony?

Via: The Verge, The Guardian