An astrophysicist from the University of Colorado for Astrophysics and Space Astronomy by the name of Webster Cash has had an idea that would allow the shading of space telescopes from the starlight, which would allow them to be able to see more accurately than even and even further than before.

He took the idea from the giant sunflower and the huge petals they have. If the Starshade spacecraft was put at around 50,000 km away from the telescope being used it would allow imaging of planets in the distance. So in effect the space Sunflower Starshade would be blooming marvellous for helping astronomers to search for alien life. 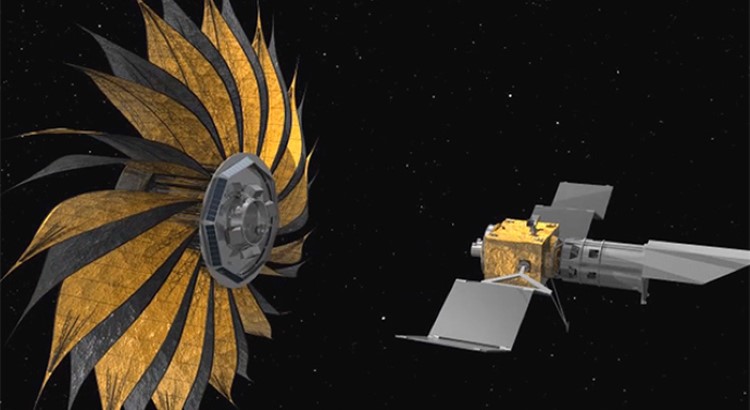 Researchers would be able to make use of the Starshade as it could be deployed to full size in space and it could image other worlds more clearly and help in the discovery of Earth twins, something that has been very difficult for planet hunters who believe that we are not alone.

Although the Starshade is in early development at the moment, it could be used to look for small planets that very bright and which are located close to stars. Scientists could find out more about planets while at the same time study them for potential life signs by taking a better look at the atmospheres of the alien worlds.

It was said that in theory the Starshade along with the partner telescope could be sent to specific orbits, being put into position via the use of thrusters. The Starshades could block out light of around 50 stars, which would degrade the quality of vision significantly. It would also bring down the size of the telescope that was needed to see over large distances.

With the light from the stars effectively blocked out, "only the light from the planet would enter through the telescope" said Sara Seager, an MIT astrophysicist. This is far from the traditional way of looking at planets using telescope, however it would be the only way that scientists could find Earth twins using what would be a small and simple telescope.

The mission is said to cost around $1 billion and over a span of three years it could target around 55 bright stars. Seager is the chair of the NASA science and technology definition team on the project and she believes that it would be possible to come across planets similar to Earth orbiting 22 out of the 55 stars that would be targeted during the mission.

At the moment there is a prototype petal being studied under the watchful eye of NASA, with the aim of a planting hunting mission at some point in the future. The petals of the Sunflower would unfold once the Starshade was in place in space and block the stars to make sure that the space telescope that was with it, could image the alien planets.

The designs of the Starshade are around 10 meters in diameter and they would need to be able to travel thousands of kilometres away from the telescope. Along with this there would be issues when it came to making a larger telescope with internal machinery that was used to correct starlight.

The whole Starshade would need to be designed with great accuracy, if it is to block out all the light effectively once it was in position. Test models are being worked on at the Jet Propulsion Laboratory of NASA (JPL) and at the Princeton University in New Jersey.

Jeremy Kasdin, the Princeton professor said "Our current task is figuring out how to unfurl the Starshade in space so that all the petals end up in the right place, with millimetre accuracy."

The lead engineer on the project at JPL, Stuart Shaklan, said "Less light-bending means that the Starshade shadow is very dark, so the telescope can take images of the planets without being overwhelmed by starlight."