The cargo ship delivered research equipment, hardware and a few batches of the 'strongest coffee in the galaxy.' The craft is set to return to earth in one month.

A SpaceX Dragon cargo ship arrived at the International Space Station (ISS), while located more than 256 miles over Quebec, Canada, early yesterday with research equipment and supplies for astronauts such as Death Wish Coffee and other special treats. The ship was captured using a robotic arm at about 6:54am EDT by NASA astronauts Ricky Arnold and Drew Feustel.

The first will seek to study the effects of microgravity on model bacterium's ability to transfer electrons while the second will examine how plants respond to water availability fluctuations.

Despite these impressive projects, what caught most news headlines was the batch of Death Wish Coffee, touted as the 'strongest coffee in the galaxy' by its producers. "We like to keep our astronauts super-caffeinated because they work harder," had joked NASA's space station program manager Kirk Shireman at the Dragon's launch.

"We created an instant blend of freeze-dried coffee, packaged by NASA in astronaut drink pouches. It’s designed to caffeinate the crew aboard the International Space Station, without sacrificing the coffee’s texture, flavor, and potency," explained Death Wish Coffee in their statement.

We're officially at the @Space_Station! https://t.co/4b2oKbFNlT

The ISS has supplied instant coffee for its crew members since November 2000 and even introduced its first coffee machine in May 2015. 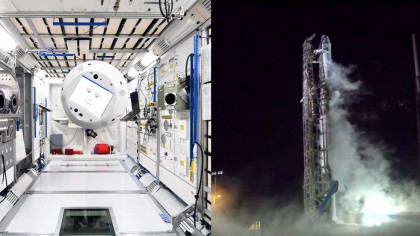 The model was a special Lavazza and Argotec ISSpresso specially engineered to brew hot drinks in microgravity.

The astronauts also received Texas blueberries and ice cream, a treat considered particularly special since most frozen areas in the ISS remain dedicated to scientific experimentation.

The Dragon's capture by ISS was aired live on NASA TV and constant updates were tweeted by the agency. Meanwhile, experts answered questions submitted through the #AskNASA hashtag.

.@DanielaHomolka's #AskNASA question this morning is, "What Happens To The SpaceX Dragon When Is It Unloaded?" pic.twitter.com/t58MFCMf02

The Dragon was finally successfully bolted into place at 9:52am EDT where it will remain attached to the ISS for a month to service the station's crew. Once its mission is completed, the cargo ship will return to Earth with the researchers' science experiment results.

SpaceX Demo-2 Launch is a Success, Astronauts Begin 19-Hour Journey to the ISS