SpaceX delivered a lot of cargo to the International Space Station and used previously flown elements of its rocket.

For the second time in company history, SpaceX has reused both a rocket booster and a payload.

It sent up a used Dragon cargo craft on a return trip to the International Space Station on April 2. The craft successfully lifted off at 4:30 p.m. EDT from Cape Canaveral Air Force Station using a pre-flown Falcon 9 rocket.

"What's neat about this is that it's becoming the norm," Jensen said.

However, while recycled rockets might be becoming the norm thanks to this launch, the company won't be landing its Falcon 9 after today. SpaceX announced they'd skip a landing for this particular Falcon 9 has already flown on another resupply mission to the ISS. (That flight took place in August of 2017.) Rather than reuse the rocket, SpaceX said it would gather data on the trip during its fall.

“This one seemed like a really good opportunity to fly a trajectory a little bit out more towards the limits,” Jensen told the crowd during a press briefing about the mission yesterday. “And that way, our engineers can collect additional data, not only during reentry but during landing that will be useful for the future.”

The payload included 5,800 lbs (2,630 kilograms) of supplies for various projects and initiatives aboard the ISS. It's set to arrive at the space station on Wednesday April 4 after two days of orbital chase. Astronaut Scott Tingle and Japanese astronaut Norishige Kanai are scheduled to bring in the payload using the Canadarm2 robot. NASA will document the payload's arrival to the space station on its livestream NASA TV starting at 5:30 a.m. EDT.

And as for the Dragon? It will stay at the ISS until May when Expedition 56 will send it back to Earth. It's expected to hit the Pacific Ocean off the coast of California. It will bring back nearly 4,000 lbs of cargo, according to SpaceX. 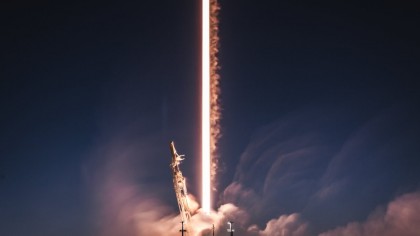 Specifically inside the payload includes equipment for 50 of the 250 experiments being conducted by the Expedition 55 crew. These projects range from a test bed for growing plants to the new Veggie PONDS experiment for passive nutrient delivery. There's also the Atmosphere-Space Interactions Monitor (ASIM) which helps researchers better understand and observe thunderstorms and upper-atmospheric lightning from the ISS. For more information about the various projects supported from this payload, read the full descriptions in a statement from NASA here.

SpaceX will launch its next space station delivery in June. Prior to that, a Falcon 9 is scheduled to send NASA's Transiting Exoplanet Survey Satellite into orbit on April 16. NASA most recently extended its contract with SpaceX to 15 launches rather than the previous numbre of 12. They've also issued a second contract to run from 2019 to 2024.