A rocket-engine explosion occurred this week at SpaceX’s testing facility in Texas, yet it will not jeopardize the company’s plans to move forward with the ambitious launch schedule for the remainder of the year.

SpaceX is now looking into the causes behind one of its rocket engines exploding during a routine test on Sunday at its development facility in McGregor, Texas. The explosion occurred with one of the company’s Merlin engines, part of a suite of rocket engines developed by the company as an experimental upgrade to the rocket engines it currently employs.

"No one was injured and all safety protocols were followed during the time of this incident," a SpaceX spokesperson said in a statement, adding, "We are now conducting a thorough and fully transparent investigation of the root cause. SpaceX is committed to our current manifest and we do not expect this to have any impact on our launch cadence."

The Merlin engine was tested as a potential option for upgrading from the block-four system currently being used to support launches to a more efficient block-five system, and most likely the explosion occurred during a lox drop, a standard leak test in which liquid oxygen gets pumped into the engine:

"The computers were showing data we didn't like during that test...and shortly after, this the explosion happened. We're going to investigate what led to that ignition. What does the video show? What do the photos show? What do the computers show?” said a source at SpaceX, adding optimistically, "It's a two- to four-week repair job."

More significantly, the company stressed that this engine-testing setback will not interrupt plans to move forward with their rather ambitious schedule, which includes three more launches of the Falcon 9 rocket as well as the first launching of its Falcon Heavy rocket. SpaceX has undeniably been experiencing a record-setting year, and it has no plans to slow its progress: a record-setting 16 launches have already been carried out this year.

This news also comes less than two weeks after SpaceX’ successful launch of the Koreasat-5A satellite aboard the Falcon 9 two-stage rocket.

The next launch, in fact, is scheduled for next week at the Kennedy Space Center.

It’s interesting to note, however, that Musk has also acknowledged that the Falcon Heavy rocket—in large part due to its 27 first-stage engine structure—could also potentially explode:

“I hope it makes it far enough away from the pad that it does not cause pad damage. I would consider even that a win, to be honest,” he said a few months earlier. “Major pucker factor, really.” 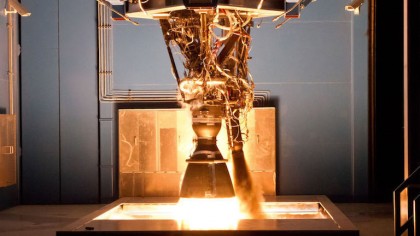 SpaceX’ Falcon 9 experienced rocket explosions in two successive years, starting with an incident at the Cape Canaveral liftoff site involving a cargo delivery mission, and most recently an explosion that occurred during a pre-launch fueling last year. What all the incidents have in common, thankfully, is that no one was injured in these explosions.

Perhaps the true test is the company’s ability to continue to navigate the pressures of delivering on its promises to consistently carry out successful missions while keeping an eye on funding, testing and feasibility realities. In this sense, SpaceX cannot afford to take a break: everyone is watching to see what their next move will be.