This event marked the heaviest payload that a Falcon 9 has carried to a geostationary transfer orbit and the second launch of a block 5 rocket.

SpaceX set a new record today by successfully launching communications satellite Telstar 19 VANTAGE to a geostationary transfer orbit (GTO). The launch marks the heaviest payload that a Falcon 9 has carried to a GTO.

The launch took place from Space Launch Complex 40 (SLC-40) at Cape Canaveral Air Force Station, Florida at 1:50 a.m. EDT. The new generation satellite was deployed approximately 32 minutes after liftoff and Falcon 9’s first stage was then recovered on the “Of Course I Still Love You” drone ship in the Atlantic Ocean.

Falcon 9 and Telstar 19 VANTAGE went vertical this afternoon on Pad 40 in Florida. Weather is 60% favorable for the four-hour launch window, which opens Sunday, July 22 at 1:50 a.m. EDT, 5:50 UTC. https://t.co/gtC39uBC7z pic.twitter.com/uFRJDBrvH9

Telstar 19 VANTAGE will now complete orbit raising and in-orbit testing. If all goes well, the satellite which has a 15-year design life is set to enter commercial service this summer. 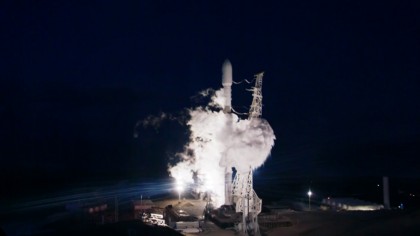 The advanced satellite is a powerful new generation Telesat, the latest in a series of communications tools that employ both broad regional beams and powerful high throughput satellite spot beams. Telstar 19 VANTAGE's design is particularly optimized to cater to the latest bandwidth-intensive applications.

The satellite will operate from Telesat’s ideal orbital location of 63 degrees West, alongside the Telstar 14R satellite which has been in orbit since 2009. From that prime spot, Telstar 19 VANTAGE will offer coverage zones across the Americas and Atlantic in both Ku-band and Ka-band to Telesat customers.

The satellite has been produced by Space Systems Loral based on models of the SSL-1300 satellite. The heaviest satellite in the world yet, it weighs an impressive 7,080 kilograms (15,600 lb).

The second launch of a block 5 Falcon 9

In addition to being the heaviest payload carried by a Falcon 9 to a GTO, the event also marks the launch of a second block 5 Falcon 9 rocket. Block 5 is mostly known for being the rocket that will likely carry astronauts to the International Space Station.

The novel rocket includes the most up-to-date final upgrades to the Falcon 9, making it more reusable, more powerful and better equipped to control its descent. Before block 5, Falcon 9 rockets had never flown more than twice.

Block 5, however, is expected to launch a record-breaking 10 times in a row without any major refurbishments. Even after 10 missions, the rocket is designed to be resilient enough to be successfully refurbished in order to complete another 10 journeys.

SpaceX's plans for the rocket are so ambitious it is estimated it may be able to pull off as much as 100 flights. For now, the firm is focused on getting through the ship's NASA-required seven launches in order to get the go-ahead to have astronauts fly aboard it.