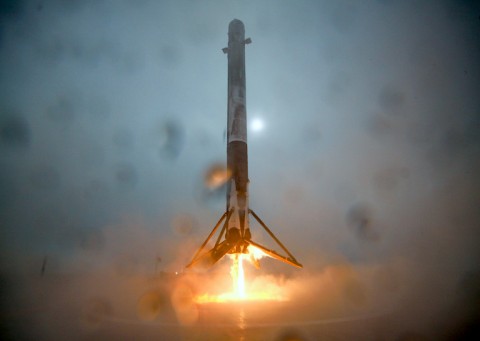 SpaceX just made history by successfully landing its Falcon 9 rocket onto its unmanned drone ship named, "Of Course I Still Love You." The rocket lifted off from Cape Canaveral Florida at 4:43 P.M. on April 8, 2016. This landing took place after Falcon 9 had launched and propelled Dragon, the spacecraft designed to carry cargo, scientific equipment and in the future, humans, to the International Space Station. The Falcon 9 is a two stage rocket, and the final stage of the rocket performed several burns in order to navigate the spacecraft safely in line with the drone ship, a feat requiring endless calculations. The complexity of this engineering feat is incalculable and many early critics did not think it even was possible.

Dragon is a free-flying space capsule that has the ability to both deliver and return shipments from the ISS. SpaceX is currently working on its next Dragon mission which includes human transport. Elon Musk named the drone ship, "Of Course I Still Love You" after a planet-sized starship which first appeared in science fiction writer, Iain M. Banks' book, The Player of Games.

Watch as the entire SpaceX team goes into orbit after watching the successful landing of Falcon 9:

And check out the landing from a different perspective:

SpaceX had made previous unsuccessful attempts in the recent past to land a rocket onto a drone ship. The botched attempts ended with the rockets either being exploded, tipped to one side or narrowly missing the landing. Yesterday's success marks a new era for the reality of reusable rockets. Elon Musk's vision of rocketry includes decreasing the high cost of rocket manufacture by reusing rockets. This latest success confirms the reality of that vision.

Dragon, which launched from Falcon 9 is set to connect with the ISS on April 10. Astronauts aboard the space station will then grab the capsule with one of their robotic arms, an event that will be live streamed starting tomorrow at 5:30 a.m. EDT on NASA TV. This payload then has the capability to return to Earth, staying intact in the descent, a feature that NASA is particularly excited about.

To get an entire overview of SpaceX operations from an insider's view, check out the hosted webcast below. One of the coolest aspects of this webcast is that many of SpaceX's engineers are the ones talking in the video.

Landing a rocket after successfully delivering payload into space is an accomplishment that will define generations of space flight moving forward. Stay tuned to Interesting Engineering for more information about how SpaceX furthers the industry of space flight and reusable rockets.

This article was a joint effort of IE Authors Trevor English and Leah Stephens.
Leah Stephens is the author of Un-Crap Your Life. She’s also an artist, experimenter and founder of Into The Raw. Follow her on Twitter or Medium.