The Iridium NEXT project is one of the largest tech upgrades in space history, a process of its kind never having been attempted before.

SpaceX launched 10 Iridium NEXT satellites today at 4:39 a.m. PDT, or 11:39 UTC from Space Launch Complex 4E (SLC-4E) at Vandenberg Air Force Base in California. The satellites are expected to be deployed about an hour after launch.

Falcon 9 and Iridium-7 went vertical earlier today on the SpaceX launch pad at Vandenberg Air Force Base in California. Weather is 90% favorable for tomorrow’s launch at 4:39 a.m. PDT, 11:39 UTC. https://t.co/gtC39uBC7zpic.twitter.com/zGw49C1UTP

Second launch in one week

The event, broadcast live from SpaceX's webcast page, was the firm' s second launch of the week, after another Falcon 9 rocket departure from Cape Canaveral in Florida on Sunday saw the Telstar 19 VANTAGE satellite carried into orbit. Sunday's flight marked the record-breaking heaviest payload brought into orbit by a Falcon 9 and the second block 5 flight.

SpaceX will then attempt to land the rocket on a drone ship called "Just Read the Instructions," according to the firm's statement. The firm was also speculated to attempt to catch the rocket's fairing with a giant net stretched across a boat called Mr. Steven.

A smaller net had failed back in June and SpaceX had said it would retry a capture in July with a net four times bigger. Meanwhile, reports surfaced hours before the launch that Mr. Steven was heading to sea before today's launch.

Yup, we are extending the net area by a factor of 4

Mr. Steven's involvement was then confirmed at the beginning of the launch's live webcast by the event's presenter. Hopefully, the addition of a bigger net will make this catch attempt a success.

This is the seventh launch in a mission to "replace the world's largest commercial satellite network," one of the largest tech upgrades in history. 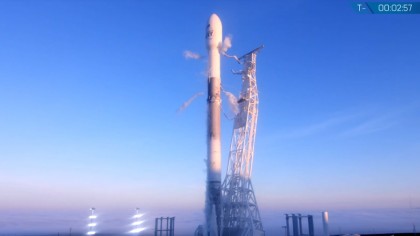 In total, the mission has planned eight Iridium NEXT launches to deliver 75 new satellites to orbit, according to a statement from Iridium.

Iridium is also the only satellite communications network to cover the entire globe keeping track of objects participating in the internet of things (IoT). The new system will feature 81 satellites with 66 in the operational constellation.

Iridium corporate provided a unique set of space travel-themed songs aired on Spotify to accompany the launch. The firm called it the Iridium 7 Spotify soundtrack.

Reminder: Everyone planning to listen along to the #Iridium7 Soundtrack w/ the SpaceX webcast, pls remember it's designed to work w/ @Spotify premium (i.e. no commercials). Check out the playlist here & build w/ your choice of service to avoid commercials! https://t.co/frmSr0VCe2

The next and final batch of satellites will be launched on August 2. We look forward to the launch and corresponding soundtrack!