In less than a month, SpaceX will send its Falcon Heavy Rocket into space for the third time using the same boosters from it's second launch.

SpaceX is preparing for its third Falcon Heavy launch, which is set for June 22 and will be an important step for the company as it tests the reusability of the twin booster rockets, last used a little more than one month ago.

Onboard, the Falcon Heavy rocket will be carrying 24 satellites from several different parties, and is scheduled to launch as soon as June 22nd, weather permitting. The US Air Force (USAF) will be monitoring the launch closely as Space Test Program 2 (STP-2), the name given to this mission, will provide an important proof of the reusability of SpaceX's rockets, which will provide a template for the future certification of other reusable rockets for military payloads.

While the US military isn't known for its thrift, it is known for its rules, and if it wants to be in the shotgun position of the growing industry of reusable rockets, it will need to codify the process that will allow it to do so. Observing the launch, recovery, refurbishment, and reusability of Falcon Heavy's side boosters will provide the USAF with the information it needs to fully get behind SpaceX's--and in a few years, late entrants United Launch Alliance and Blue Origin's--reusuable rockets for launching military satellites.

This month's launch will be the first time that SpaceX has attempted to reuse the booster rockets from a Falcon Heavy launch. On April 11th, the Falcon Heavy successfully carried Arabsat 6A into orbit and the two side boosters detached from the Falcon Heavy a few minutes into the launch, returning to Cape Canavarel, and performing a perfect twin landing on a pair of launch pads. 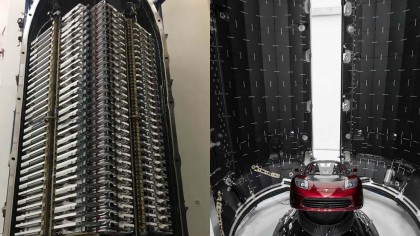 The side boosters were then laid on their side and brought into the main hanger for Pad 39A. There, SpaceX engineers inspected the boosters for damage and the boosters were soon refurbished, restoring the boosters to good working condition. The two booster rockets had an easier time of it compared to the Falcon Heavy Core--other than the fact that it ended up tipping over the edge of the drone recovery ship Of Course I Still Love you in a storm on its way back to the mainland--since they detached at a lower altitude, so weren't subjected to the same kind of intense reentry conditions.

This means that they should be in good shape to go later this month. There will be a static fire test sometime in June and if all goes well, Falcon Heavy will be launching for the third time on June 22.