The aerospace company launched the rocket from Kennedy Space Center in Florida on Wednesday, making it the 15th flight for this year and the third time a first stage booster has been reused.

The second SpaceX launch for this week was successful, making this the 15th Falcon 9 flight of 2017.

This was also the third time SpaceX was reusing a first stage booster which settled into a pinpoint landing on the drone-ship “Of Course I Still Love You” which was stationed several hundred miles from Cape Canaveral.

“It’s the difference between having airplanes that you threw away after every flight, versus reusing them multiple times,” said Elon Musk on SpaceX’s live video feed right after the first successful landing of a reused first stage booster in March of this year.

This landing is the 18th successful booster recovery in 23 attempts for the aerospace company and the 14th landing in a row.

Wednesday’s flight began at 6:53 pm EDT(GMT-4) when the Falcon 9’s nine Merlin 1D engines were fired up and throttled to full thrust. After standard checks, the rocket rose into the sky to begin its eight-minute 33-second climb into orbit.

The first stage performed flawlessly, flying through the lower atmosphere. Two and a half minutes later the engines shut down, and the first stage fell away back to earth, restarting three Merlin engines to slow and begin its descent, using computer-controlled “grid fins” at the top of the booster to help with proper orientation.

After a short fall, the rocket booster dropped tail first onto the awaiting drone-ship in the Atlantic Ocean, with a single engine ignited and four landing legs deployed.

Meanwhile, the second stage ignited and continued its climb into space. The goal of this mission was to put an Airbus-constructed Eurostar 3000 satellite into orbit which Falcon 9’s second stage did right after the first stage landed back on earth. A quick second burn by the upper stage put the SES-11/EchoStar 105 into a required elliptical orbit.

Eurostar 3000 will do the rest, using onboard thrusters to put itself into a circular orbit 22,300 miles above the equator, positioned at 105 degrees’ west longitude. 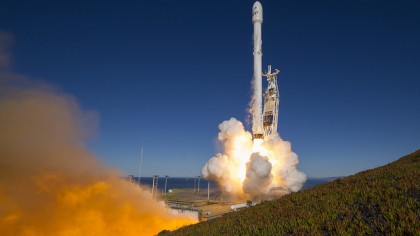 Luxembourg-based SES owns 24 C-band transponders on the satellite to provide television to North America. Echo Star will use 24 Ku-Band transponders to give service to the U.S government and commercial companies across the United States, Gulf of Mexico and The Caribbean.

"We're looking at about 100 million TV homes over the United States. ... We're trying to utilize this for the development of Ultra HD, trying to encourage the usage and distribution of that. We're covering the whole of (continental United States), plus Hawaii, Mexico and Caribbean as well, so it has very good coverage," Martin Halliwell, chief technology officer at SES, told Spaceflight Now a few hours before launch.

SpaceX is planning 20 launches this year, including the first flight of its Falcon Heavy, a rocket with three Falcon 9 core stages strapped together with a standard second stage. We can look out for that launch at the end of this year.