Falcon 9 and Telstar 18 VANTAGE are vertical on Pad 40 in Florida. Weather is 60% favorable for tonight’s four-hour launch window, which opens at 11:28 p.m. EDT. → https://t.co/gtC39uBC7z pic.twitter.com/BScLG1xJD9

The Falcon 9’s first stage returned to earth approximately 8 minutes after liftoff with a successful landing on the Of Course I Still Love You drone ship. The ship will head back to shore, returning to Port Canaveral in a couple days.

The Telstar 18 VANTAGE is the third high throughput satellite (HTS) for Canadian company Telesat's global fleet. It is the first satellite for the company to provide coverage over the Asia Pacific region.

The satellite was built by SLL, a Maxar Technologies Company. The latest addition to the fleet will replace Telesat’s Telstar 18 satellite.

The Telstar 18 VANTAGE’s coverage reaches across Asia all the way to Hawaii – in both C and Ku-bands – enabling direct connectivity between any point in Asia and the Americas. The satellite has an expected life expectancy of about 15 years in orbit.

“We are pleased to be making this important addition to our global satellite fleet and, moreover, pleased to continue our long and successful relationship with APSTAR, a leading Asian operator with whom we have closely cooperated for over a decade.”

SpaceX did not attempt to recover the nose cone of the rocket, known as the payload fairing. The recovery of this expensive part of the rocket is needed for SpaceX to achieve its dream of reducing launch costs.

The company has attempted previous recoveries using a boat equipped with a giant net but has not had any success. 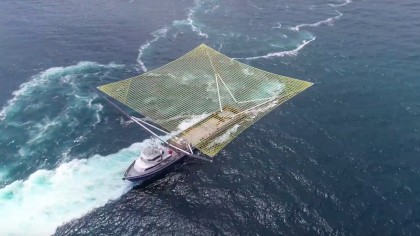 The rocket’s first stage, however, was successfully recovered. "We don't have a view but we hear recovery calling out, 'Falcon 9 has landed,'" John Insprucker, Falcon 9 principal integration engineer, said during SpaceX's launch webcast today.

SpaceX recently upgraded Mr. Steven to have a net surface area of around 3700 m². The payload fairings makeup about 5% of the rocket’s total value, but are usually discarded once the rocket leaves the atmosphere. If SpaceX can work out how to catch and rescue this integral part, the private company will be able to massively reduce launch costs.