To start this year off strong and continue the momentum of success and achievement from 2017, SpaceX carried out a government spacecraft launch on Sunday.

After a year of almost uninterrupted success culminating in its 18 record launches of 2017, SpaceX, it seems, is out to kick off this year with an even more ambitious set of initiatives.

The first one for 2018: the launch of Zuma. The launch is generating great interest because the space-bound Zuma is a government spacecraft, leading many to suspect that this year SpaceX will form even more partnerships in various sectors for their missions.

The SpaceX Falcon 9 launch happened on Sunday evening at 8 p.m. EST from Cape Canaveral Air Force. Anticipation had been building for the launch since November when Tesla CEO Elon Musk had first scheduled the mission—the secretive payload had been sitting atop one of the rockets for about 2 months. 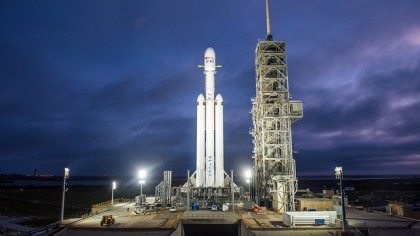 In true 007 style, neither the precise destination nor any specs about the spacecraft or the government source(s) funding the mission were revealed, although the National Reconnaissance Mission (NRO) reported back in November that Zuma, in fact, did not belong to them, which shifts the possibility from the intelligence agency to the CIA or some other non-military agency. Northrop Grumman Communications Director Lon Rains offered an optimistic, but somewhat vague statement about Zuma back in November on behalf of the Virginia-based global security company:

"Northrop Grumman is proud to be a part of the Zuma launch. This event represents a cost-effective approach to space access for government missions. The U.S. Government assigned Northrop Grumman the responsibility of acquiring launch services for this mission. We have procured the Falcon 9 launch service from SpaceX. As a company, Northrop Grumman realizes this is a monumental responsibility and we have taken great care to ensure the most affordable and lowest risk scenario for Zuma. The Zuma payload is a restricted payload. It will be launched into Low Earth Orbit."

NASA classifies Low-Earth orbit (LEO) as an orbital path of less than about 1931 kilometers above the surface of the Earth; however, as Zuma’s specific destination was not disclosed, the nature of the LEO cannot be officially determined. The secrecy of the mission also meant that SpaceX was unable to provide one of its usual live feeds.

The launch itself was fairly routine and uneventful: most importantly, the first-stage rocket booster returned for a safe landing. Its engines were fired after it separated from the second stage, with the rocket later entering the Earth’s atmosphere to touch down at Cape Canaveral Air Force Station. As in the case of most launches, SpaceX opted to use booster rockets owing to the amount of reuse that occurs with them throughout the year.

SpaceX Senior Communications Manager James Gleeson has said in a company statement that SpaceX hopes to top the success it achieved last year. One key part of this will be the Falcon Heavy launch, which is scheduled for later this month. Unlike in the case of his overwhelming success with Tesla, Musk must walk a fine line between showmanship and innovation. It seems in 2017 he managed to find the balance, and we will be closely following SpaceX to see what new records it will shatter in 2018.