This is the first of two launches for this week, the first being a ten satellite payload for the new Iridium NEXT constellation and the second is for the SES-11/EchoStar 105 satellite.

Update: The launch was successful! The 14th flight of the Falcon 9 rocket went off without a hitch. The second stage booster also reentered Earth's atmosphere and landed back on the drone ship safely. Onto the next launch, which takes place this Wednesday, stay tuned.

So far for this year, SpaceX has had a slew of successful launches. Now the company is set for two starts in three days -- with the first being today. Watch it live below.

SpaceX plans to launch ten satellites into orbit about 700km above the Earth for Iridium. The launch is scheduled for 8:37 a.m. ET, and will leave from Vandenberg Air Force Base in California.

This will be the third of eight launches for Iridium and its newest endeavor Iridium NEXT. Iridium was initially a 66-satellite constellation providing voice and data coverage to over Earth’s entire surface. 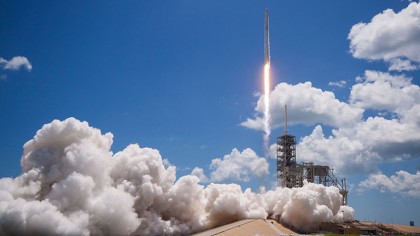 The company is currently replacing its existing constellation of communications satellites by sending 75 Iridium NEXT satellites into space via SpaceX Falcon 9 rockets over eight different launches.

“Like Iridium’s current satellite constellation, Iridium NEXT will deploy a cross-linked Low-Earth Orbit (LEO) architecture, providing coverage over 100 percent of the earth’s surface, including across oceans, airways and polar regions,” reads the website description.

As with previous launches, SpaceX will attempt to return the first stage booster to the “Just Read the Instructions” drone ship in the Pacific Ocean.

The second launch on Wednesday will see SpaceX attempt to set off from Kennedy Space Center at 4:30 pm ET.

This mission intends to put the SES-11/EchoStar 105 satellite into geostationary orbit and is particularly unique in that it will be the first time SpaceX is flying a recycled or “used” first stage booster—this will be the third time the company has given this a go. A drone ship landing will take place in the Atlantic Ocean this time.

If all goes according to plan, these launches will silence the naysayers who doubted SpaceX’s ambitions for 2017 and see the Californian company fly more orbital rockets this year than any other aerospace company on the planet. These successful attempts are milestones along SpaceX’s road to Mars, an event that is looking more and more likely for Musk’s company.

Bloomberg created a helpful infographic of SpaceX’s many success and mishaps since beginning their rocket journey in 2010.