SpaceX has successfully launched its previously used Block 5 variant of its Falcon 9 rocket. The Block 5 had its initial launch on May 11. The launch was used to deliver the Merah Putih satellite to a Geostationary Transfer Orbit.

SpaceX only had a two-hour launch window that opened at 1:18 am EST Tuesday in which to complete the mission. The Falcon 9 with the Block 5 launched from Complex 40 at Cape Canaveral Air Force Station in Florida.

The rocket's first stage made a successful landing on the 'Of Course I Still Love You' drone ship.

Falcon 9 first stage has landed on the Of Course I Still Love You droneship. pic.twitter.com/HCRvCYopuM

SpaceX hasn't gone into detail about how difficult it was to get the used Block 5 ready for reuse but SpaceX CEO, Elon Musk made Twitter comments last month that hinted it isn't an easy process.

Looks good, but so many details need to be right. Journey back from hypersonic becomes extremely difficult as velocity increases. Altitude is easy, velocity is hard.

At the time of its initial flight Musk said he was excited but ready to be vigilant before any parts of the rocket were re-used. "We are going to be very rigorous in taking this rocket apart and confirming our design assumptions to be confident that it is indeed able to be reused without taking it apart,” Musk said. “Ironically, we need to take it apart to confirm it does not need to be taken apart.”

SpaceX hopes to continue to reduce the cost of space travel by reusing key parts of the rocket's design. The space exploration company successfully flew a used booster for the first time back in March 2017. A Block 4-core was used to launch the SES-10 satellite, the Block 4’s first journey was 12 months previous.

Recent success point to cheaper launches in the future

Just by looking at the massive reduction in time, we can assume SpaceX has been working on the reusability of the blocks with good success. 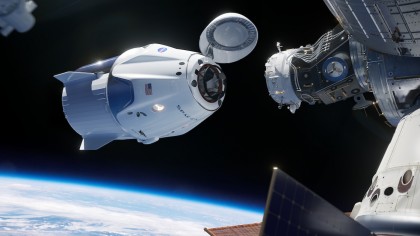 Reportedly, SpaceX has boasted that the new Block 5 first stages should be able to launch 10 times with just inspections between landing and liftoff, and 100 times or more with some minor refurbishment involved.

The satellite launched today, dubbed Merah Putih, which means "red and white," in a reference to the Indonesian flag will assist PT Telkom Indonesia to provide communications services to customers throughout Indonesia and the greater Southeast Asia region.