SpaceX’s Crew Dragon, NASA's capsule for carrying astronauts to and from the International Space Station, arrived in Florida this week to continue its ongoing flight preparations. The capsule was transferred there from a previous NASA facility in Ohio.

Crew Dragon arrived in Florida this week ahead of its first flight after completing thermal vacuum and acoustic testing at @NASA’s Plum Brook Station in Ohio. https://t.co/xXJE8TjcTr pic.twitter.com/lr0P95zzIK

Once all testing is completed, Crew Dragon will make a first uncrewed practice run to the International Space Station during an orbital test named Demonstration Mission 1 (DM-1). NASA’s SpaceX’s Falcon 9 rocket is scheduled to launch DM-1  next month from the Kennedy Space Center. 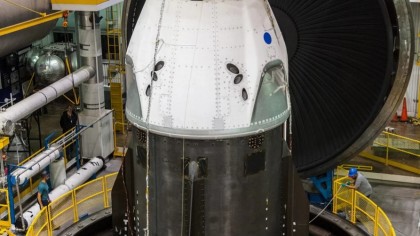 The mission will see Crew Dragon hook to the station for a few weeks and then descend down to Earth uncrewed. If all goes well, SpaceX will then proceed with an in-flight abort test followed by the first crewed demonstration flight named Demonstration Mission 2.

SpaceX is not the only company to be preparing crewed test flights. NASA has also awarded contracts to Boeing under its Commercial Crew Program.

"After completion of each company’s uncrewed and crewed flight tests, NASA will review the flight data to verify the systems meet the requirements for certification. Upon NASA certification, the companies are each slated to fly six crew missions to the International Space Station beginning in 2019 and continuing through 2024," announced a NASA statement.

Boeing is currently testing its Starliner craft "designed to accommodate seven passengers, or a mix of crew and cargo, for missions to low-Earth orbit." If approved, the craft will launch on a United Launch Alliance Atlas V rocket from Space Launch Complex 41.

Both firms are also working on spacesuit models designed for their individual projects. These suits, along with other accompanying accessories such as parachutes, also need to undergo thorough testing.

However, should all testings prove successful, NASA's plans may still be derailed. This week, the US Government Accountability Office issued a report detailing many recommendations for the agency and revealing that certifications may not be given until the end of 2019 or even 2020.

Recommendations outlined included requests to have the results of NASA's schedule risk analysis presented in mandatory quarterly reports to Congress, the documentation of lessons learned related to loss of crew and the provision of assessments on risk tolerance levels related to those losses. What this means is that Russia's Soyuz, currently the only crew carrying approved craft, may remain the sole means of transportation for humans to space for a while.