After months of delay, SpaceX's unmanned Demo-1 mission is finally off the ground.

After months of delay, SpaceX’s Dragon Crew capsule was successfully launched into space this morning, the first step of an unmanned crew flight that will set the stage for the first manned space mission to lift off from US soil in nearly a decade.

Launching from the historically significant Launch Complex 39a at Cape Canaveral, Florida—which launched the Apollo 11 Mission that put the first man on the moon—SpaceX’s Dragon Crew capsule was successfully launched into low-Earth orbit this morning, just before 3 AM EST.

The two-stage rocket system used to send the craft into space performed as expected, with the stage 1 Falcon rocket landing on a barge 500 km off the coast in the Atlantic Ocean.

The launch is the first stage of a several-days-long test of the crew capsule that SpaceX calls Demo-1 and will be a dress rehearsal for the historic manned test flight of the Dragon Capsule to take place this Summer.

The next stage in Demo-1 is for it to autonomously dock with the International Space Station (ISS), where it will remain for 5 days. Finally, the capsule will detach and return to Earth, testing its reentry and landing systems.

Setting the Stage for Demo-2

If Demo-1 is successful, then there will be one last test of the Dragon Crew’s in-flight abort system in another few weeks, after which SpaceX and NASA Commercial Crew hope to have Demo-2, the first anticipated manned space flight to launch from US soil since the Space Shuttle was retired in 2011, ready to launch by July.

Since the end of the Space Shuttle program, NASA astronauts have been hitching a ride on Russian spacecraft to get to the ISS. 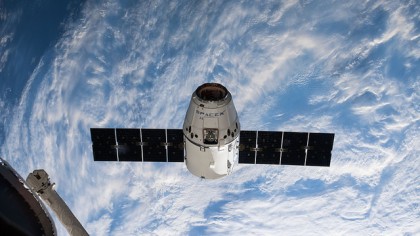 The crew for Demo-2 is scheduled to be Bob Behnken and Doug Hurley, who piloted the final space shuttle mission, so the return to space for Hurley is full of significance, especially for NASA’s Commercial Crew program.

Commercial Crew has been the liaison between the US space agency and the collection of private ventures exploring commercial space travel since the end of the space shuttle program and has been working for years building up to this summers anticipated manned mission.

It will also be the first time that a fully owned and operated commercial enterprise has ferried US astronauts into space.