SpaceX's Falcon 9 Made A Successful Landing Despite "Extreme Weather" Conditions

SpaceX's next immediate mission after the very recent Bulgariasat-1 successfully deployed its payload to Low-Earth Orbit as planned. The Falcon 9 rocket responsible for delivering the mission also managed to land on the designated drone ship called "Just Read The Instructions" located in the Pacific Ocean.

The Falcon 9 rocket launched a batch of 10 satellites for the Iridium NEXT Mission, the largest "tech upgrades" in history. The Iridium-2 mission launched from the Vandenberg Air Force Base in California. The launch window was scheduled at 1:25 pm PDT or 20:25 UTC on June 25, 2017. This mission saw the second re-launch and re-landing of a previously used Falcon 9 rocket, which strengthens SpaceX's reputation as a world-leader in manufacturing flight-proven boosters.

You can watch the replay of the Iridium NEXT Mission here and the landing of the first stage booster.

The first stage booster of Falcon 9 will try to land on the "Just Read the Instructions" drone ship positioned in the Pacific Ocean. An hour after the launch, the satellites will begin to deploy. Each of the Iridium satellites weighs 860 kg and covers a 4,700 km wide footprint.

Falcon 9 and 10 @IridiumComm NEXT satellites are vertical on SLC-4E at Vandenberg Air Force Base in California. pic.twitter.com/YiDZrnQMvU

Considered as the largest "tech upgrades" in history, the Iridium NEXT is replacing the world's largest commercial network of Low-Earth Orbit satellites. Iridium partnered up with Thales Alenia Space to manufacture, assemble, and test all of the 81 Iridium NEXT satellites. 75 of those satellites will be launched by SpaceX. This mission to replace the satellites in batches in a network of this size and scale has never been attempted before. Iridium's satellite network is the only one to span the entire globe, providing real-time connections between people, organizations, and assets from anywhere in the world.

By deploying a cross-linked network of Low-Earth orbit satellites, Iridium NEXT will be able to provide coverage to over 100% of the Earth's surface. This includes airways, polar regions, and across oceans. Iridium's next-generation satellite constellation is expected to innovate the present communications technology and also that of the future. The Iridium NEXT Mission, reported to have a price tag of $3 billion, will completely replace the current 66-satellite Iridium constellation.

On January 14, 2017, SpaceX already launched the first 10 satellites for the Iridium NEXT Mission using a Falcon 9 rocket. The mission today is the second batch of satellites to be deployed and the next batch (satellites 21-30) is scheduled to launch on August 24, 2017. 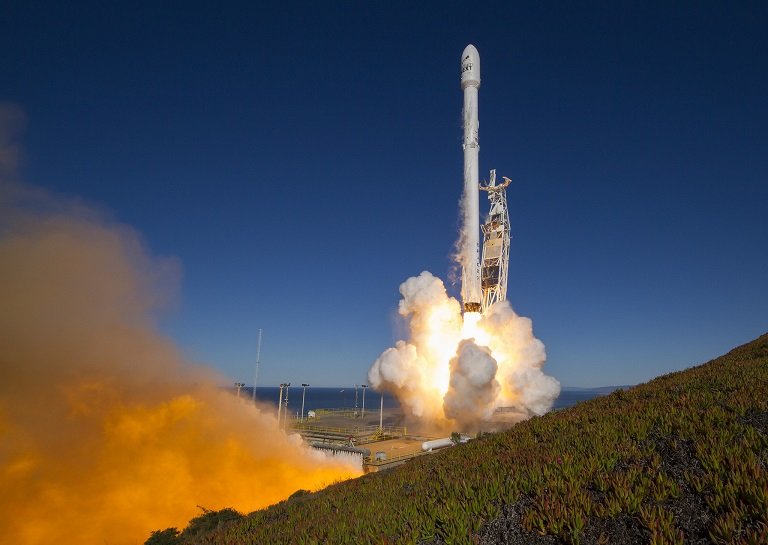 After the successful delivery of the Iridium-2 mission, SpaceX will be conducting 6 more launches for the Iridium NEXT Mission using Falcon 9. The series of launches will happen until mid-2018 to complete the deployment of the 75 satellites.

Elon Musk and SpaceX are ultimately aiming to make spaceflight a regular event. By making rapid rocket launching a possibility, they will be able to open up new space opportunities like sending a colony of humans to Mars. Musk wants to send millions of people to space and he estimates that it could be achievable within the next 50 years. In his recently released paper entitled "Making Humans a Multi-Planetary Species", the billionaire laid out his plans to colonize the red planet. While this is still deemed as a thing of science-fiction, space fans could, for now, revere the many milestones SpaceX and Musk are achieving with regards to spaceflight.

With only 48 hours in between, two Falcon 9 rockets launched and successfully completed their mission. More impressively, both first stage boosters managed to land on their designated drone ships at the eastern and western side of the world.

Elon Musk posted the last of the two Falcon 9 landings, for the Iridium NEXT Mission, as you would see it if you were strapped onto the booster re-entering Earth. It's a spectacle really as it's not every day we see this kind of rocket landing perspective.

Even if the drone ship called "Just Read The Instructions" had to be repositioned because of the "extreme weather", the first stage booster still managed to pinpoint its location and landed on it. The drone ship was located in the Pacific Ocean and as can be seen from the video, a layer of clouds shrouded the position of the landing platform. But despite this condition, the rocket landing was still successful.

Launch at 1:25 delivering 10 satellites for Iridium. Droneship repositioned due to extreme weather. Will be tight. https://t.co/6ZcSG29B74

The same can be said for the Falcon 9 landing of the Bulgariasat-1 mission that was launched two days prior. Despite the rough landing, the Falcon 9 first stage booster was still recovered from the "Of Course I Still Love You" drone ship stationed at the Atlantic Ocean.

During the two SpaceX missions this past weekend, Musk was actively posting details and updates regarding the back-to-back launches. In an Instagram post, Musk gave an insight into the grid fin technology SpaceX manufactured for the Falcon 9 rocket. He emphasized that the newly incorporated grid fins give the rocket more control and is not requiring any rework after landing. This means that used rocket requires less work for its next flight, which further pushes SpaceX's quest in making rapid rocket launching a possibility. It will also make space missions more affordable to execute for smaller companies and business. Just take the Bulgariasat-1 mission for example.

About to launch Falcon 9 with the new titanium hypersonic grid fins, cast and cut in a single piece. At each corner, the grid slopes up into a sharp spire, giving them a bear claw appearance. Results in more control and no rework between flights.

So, what's next for SpaceX and Falcon 9? Lucky for some SpaceX and rocket launch fanatics, there wouldn't be that long of a wait until another Falcon 9 rocket sets off for space. Next month, a Falcon 9 rocket will launch the Intelsat 35e communications satellite from the Kennedy Space Center in Florida. SpaceX will also conduct a series of NASA missions and launches of the next batch of Iridium NEXT satellites. With these future missions come new challenges and opportunities to develop and improve current rocket technology. By constantly developing their rocket technology, SpaceX and Elon Musk will be a few steps closer to achieving the pinnacle of their purpose. To conquer space and populate other planets to ensure the survival of our civilization.