The SpaceX recovery vessel, 'Mr. Steven' has been seen completing high-speed testing with a new upgraded net and catching arms. Just days after the upgrades were complete, the 62-meter long boat was spotted doing aggressive high-speed maneuvers off the coast of the Port of Los Angeles.

The speedy install of the nets and arms in addition to this fast testing period suggest SpaceX is keen to attempt to recover the Falcon 9 fairing after the rocket launch on July 25th for the Iridium-7 mission.

In the last few weeks, the recovery vessel has undergone major upgrades so that it now has a catchment area four times bigger than its previous iteration.

I got me a new net for some sky fishing ?
By kegman83 on reddit ;) pic.twitter.com/ZQiFrxUkUY

The vessel's huge baseball glove-like net now stretches out to 3700 m². The new upgrades give SpaceX a really good chance at completing its first catch. Both the Falcon 9 and Falcon Heavy rockets make use of detachable heat shields — known as rocket fairings.

These fairings are at the nose of the rocket and protect the payload during blast off. The fairings are made at a huge cost, about 5% of the rocket’s total value, but are usually discarded once the rocket leaves the atmosphere. However, Elon Musk’s vision for SpaceX is to catch and rescue these fairings to reduce the overall cost of building and launching the rockets.

If all goes well, the parachute equipped rocket fairings should float back to earth, landing safely in the new massive net.

Recovery vessel will re-debut on July 25

Mr. Steven needs to be able to respond fast to any alteration to the rocket fairings' course in order to position itself for a successful catch and recovery. It will get its chance on July 25 when the Iridium’s NEXT 7 multi-satellite launch is scheduled.

Initially planned for July 20, the launch was delayed to ensure adequate time for SpaceX engineers to prepare the company’s third Falcon 9 Block 5. The slight delay also bought some time for Mr.Steven to be as ready as possible for its latest upgraded debut.

SpaceX needs to find balance between re-use and recovery cost

Mr. Steven was first deployed in February but failed to catch either of Falcon 9’s fairings. 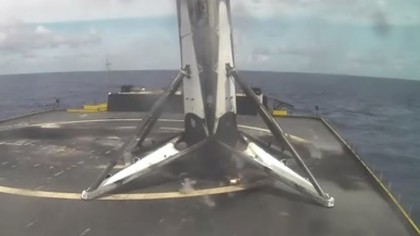 In May, SpaceX reported they were able to recover both fairings from a Falcon 9, but that neither successfully landed on Mr. Steven’s net, instead both hit the ocean.

It seems the watery launch didn’t damage the fairings however it is unlikely that they can be reused due to their saltwater immersion. SpaceX has said they want to do at least 24 Falcon launches next year. Being able to catch at least some of the fairings from these missions would, in theory, go a long way to reduce the cost of each mission.

However, critics also observe that the increased sea fleet adds a huge amount of cost and complexity to missions that may become a hindrance to SpaceX's overall vision.