Spooky Action at a Distance Happens at 10,000 Times FTL

Dr. Juan Yin and his research colleagues at the University of Science and Technology of China in Shanghai have recently used an experiment which, to them, demonstrates that the lower limit -- yes, the lower limit -- to the speed associated with entanglement dynamics (which is what Albert Einstein called "spooky action at a distance") is at least 10,000 times faster than light. 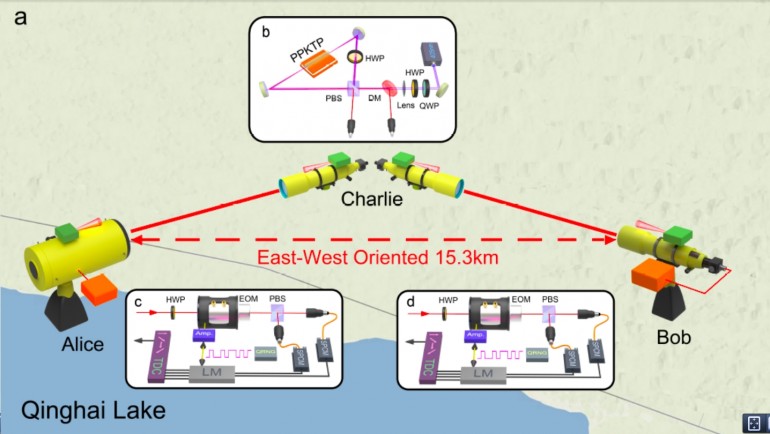 [Image Source: University of Science and Technology of China in Shanghai]

Entanglement dynamics has to do with quantum physics. It observes that two objects -- which may be sub-atomic particles -- definitely seem to have direct responses to each other’s behavior while they are widely separated by place and time, or “spacetime”, the limiting upper travel speed of which is the speed of light.

Although he could not accept non-local entanglement, Albert Einstein was part of a small team of scientists who in 1935 discovered what is now known as the “EPR Paradox” after physicists Eintstein, Poldolsky, and Rosen. The EPR paradox tells us that the sole way of explaining the observed effects of quantum entanglement is either to make the assumption that the universe is non-local, or that the real and authentic basis of physics remains cloaked by what is called the "hidden-variable theory".

Einstein was adamant until his last minute on Earth that subsequent discoveries in physics would prove the hidden-variable theory to be correct, and he famously summed up his repulsion by "spooky action at a distance" by stating "God does not play dice with the universe", by which he meant that for any objects to directly act upon each other they had to interact within the limits imposed by the speed of light, so that objects which are placed too far apart from each other cannot have instant interactions -- which is what was, and which is what still is, observed over and over again in quantum mechanics.

Dr. Yin and his colleagues explain their experimental setup and conclusions in this paper.

The implications for space travel across vast distances and for faster-than-light communication are almost beyond imagining.

Life in 2050: A Glimpse at the Economy in the Future

Life in 2050: A Glimpse at Warfare in the Future