According to the Daily Mail, Aviation experts were baffled when a British Airways plane from Hong Kong landed at Heathrow airport with a square tire. The aircraft was an Airbus A380 and it was reported that upon take-off, it had received a low-pressure tire warning. The airplane continued on its flight, disregarding the warning. An A380 is designed to be perfectly safe, even when one wheel isn't working. But the pilot requested that a tow tug be available at the London airport in case the aircraft was unable to taxi to the gate by itself. The airplane, however, made a safe landing and was able to taxi itself to the gate. It was after it landed that the square tire was discovered.

A Civil Aviation Authority spokesman described the curious square tire as a "bit mysterious" and confessed that he's never seen one like it. 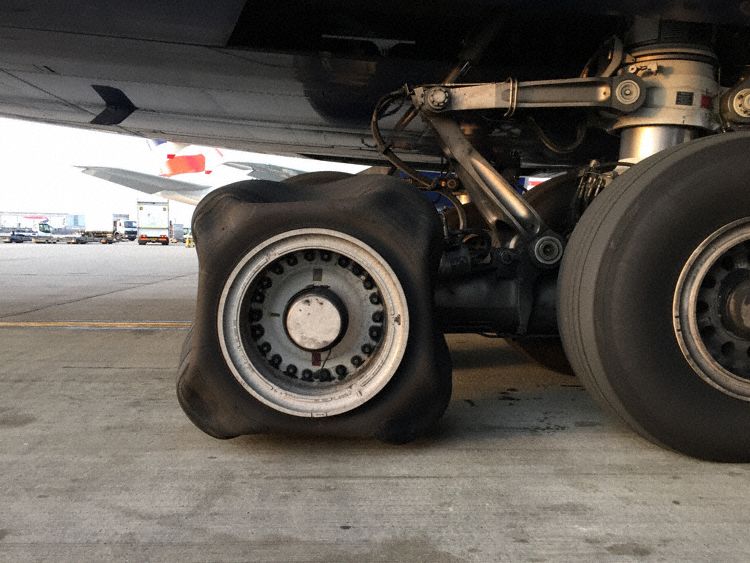 It seems that none of the aviation experts could explain why the deflated tire had become square in shape. According to author Patrick Smith, "The tire deflated and the subsequent rotation caused it to fold in on itself in four symmetrical segments." Another expert said that the square shape was probably caused the way the weight was distributed onto the wheels of the A380. Still another aviation expert named Kumar Mysore went further in describing how a round tire could take on a square shape:

So, when we consider that the square shape wasn't there when the tire was deflated and was spinning around, this seems to make more sense. Also, think about rubber toys that change shape based on the amount of pressure you apply. When you squeeze a deflated rubber ball, you can change the shape easily with varying amounts of pressure. The tire is doing the same thing, changing shape due the lack of air pressure within it. So perhaps when a large weight is applied to a rotating, deflated round object, a square shape is the end result?

But this still doesn't completely explain why the shape is square and not some other shape. Perhaps the rubber of the tire got overheated, and this heating changed the rubber material's properties. If we look closely at the photo, we can see that the caved in areas contain the excess rubber material.  None of the explanations truly explain why the tire's shape became square. Do you know the answer? If you do, please comment below and enlighten us.

SEE ALSO: Goodyear’s a new tire design can charge your car as you drive