Stanford engineers have developed sensors to give robotic hands a sense of touch sensitive enough to handle a berry without crushing it.

Stanford engineers have developed an electronic glove that can offer robots an almost human sense of touch. The novel invention uses sensors so advanced they can allow a robotic hand to handle objects as delicate as a berry without squashing them.

“This technology puts us on a path to one day giving robots the sort of sensing capabilities found in human skin,” chemical engineer and project lead Zhenan Bao said. And it does this by literally imitating the way layers of human skin work together in real hands. 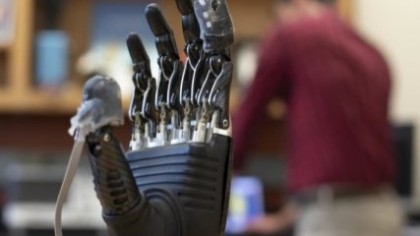 To achieve this, Bao and her team based the mechanism for their work on the spinosum, a bumpy sublayer of human skin that works with the outer layer to detect pressure, heat and other stimuli related to touch. One of the areas the researchers specifically focused on is the structure that allows human skin to sense shear force.

It is this unique capability that allows human to hold things firmly enough not to drop them, yet gently enough not to destroy them. Inspired by this, the team created sensors made of three crucial flexible layers consisting of electrically active top and bottom sections complemented by a rubber insulator in the middle.

They then placed those sensors on a rubber glove that they fit on a robotic hand, creating robotic fingers. These fingers function by squeezing the upper electrodes of the top layers, increasing the stored energy, while using the hills and valleys of the bottom layer, created bumpy just like the spinosum, to map the intensity and direction of pressure to specific points.

So far Bao and her team have successfully programmed the glove-wearing robotic hand to gently and safely touch a berry as well as move a pingpong ball. In both cases, the sensors were able to detect the appropriate shear force to grasp and handle the objects without damaging them or dropping them.

The researchers now hope to someday embed the sensors directly into a specialized skin-like covering for robots.

Future applications are near endless ranging from manufacturing to healthcare. The technology could one day see robots do everything from lifting and placing eggs on a conveyor belt to assisting in complex surgeries requiring a precise and steady touch.

However, Bao says the ultimate goal would be to create sensors that can actually recognize the objects they handle. “We can program a robotic hand to touch a raspberry without crushing it, but we’re a long way from being able to touch and detect that it is raspberry and enable the robot to pick it up,” she said.

The paper was published this week in Science Robotics.

How Bionics Are Behaving More and More Like Real Limbs