The galaxy's favorite droid sold for nearly $3 million at an auction earlier this week. It even out-sold Luke Skywalker's iconic lightsaber.

The galaxy's best companion just sold for nearly $3 million at an auction earlier this week, greatly outselling other Star Wars items up for grabs. The 43-inch (109 cm) tall droid contained nearly all of its original parts and items featured in the original trilogy and the first two prequels. No interior bells and whistles came with the droid, however, but we're sure the buyer has no problems with making his own R2-D2 noises.

The price certainly matches the love of the character. R2-D2 was one of the first 'faces' of the Star Wars universe, giving Obi-Wan and Luke the iconic message from Leia -- "Help me, Obi-Wan Kenobi. You're my only hope." Lando Calrissian praised R2's quick thinking and resourcefulness in times of trouble: "That droid's a sawed-off genius! He's laying down a smokescreen!"

Many fans were elated to see the droid and his companion C3-P0 return for the latest trilogy's The Force Awakens. English actor Kenny Baker gave life to the blue and white droid throughout the Star Wars franchise. Baker died in August 2016; Jimmy Vee took up the mantle for R2-D2 in the latest franchise installment. Throughout filming of A New Hope, Lucasfilms crafted four R2-D2 units -- two for Baker and two rigged up for stunt usage.

R2-D2 wasn't the only item on the auction block. Luke Skywalker's original lightsaber wielded by Mark Hamill throughout the original trilogy only went for $400,000. Ripley's Believe It or Not museums bought one of the most iconic weapons in the galaxy.

Darth Vader's helmet and shoulder armor also went up for grabs. However, the selling price for one of the world's most notorious villains remains unreleased. Similar helmet pieces have sold for over $100,000 in previous auctions, according to Profiles in History. 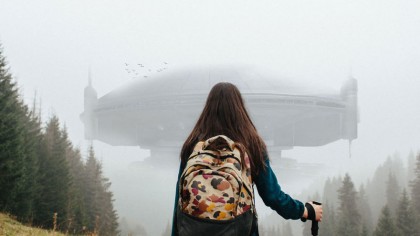 This Photographer Sets His Work in the Star Wars Universe

Curious as to the most expensive items ever sold from the Star Wars franchise? According to Profiles in History, the company that facilitated this most recent auction, a model TIE Fighter raked in $402,500 in 2008. This makes the scale TIE Fighter one of the most sought-after props in cinema history. The second most expensive item sold at auction was the Rebel Blockade Runner. It graced the first few seconds of Star Wars: Episode IV A New Hope. The figurine was filmed via the Dykstaflex track. That track was the world's first digital motion controlled camera system specifically rigged for George Lucas.

The most expensive Star Wars item ever sold, however, doesn't belong to any particular character. It belonged to director George Lucas himself. In 2011, Lucas's Panavision PSR 35 mm camera sold for $625,000. The late Hollywood icon Debbie Reynolds (and mother of Leia actress Carrie Fischer) bought the camera.

This Hydrogen-Powered Carcopter Is A Real-Life Star Wars Podracer