You have probably seen images or even videos of the B-2 bomber, but what is the technology that allows it to fly under the radar? In essence, stealth planes are designed to reflect radar waves away from the source, so that those on the ground can't register a reading on their tracking systems. Designing a plane where no surface reflects the observer is actually pretty hard, but using complex computer algorithms, it can be done perfectly. Check out the video below for a look at the physics behind it.

The B-2 stealth bomber, with a wingspan of 172 feet, is recognizable by nearly everyone familiar with modern military aircraft. Radar uses short pulses of electromagnetic energy to develop a picture of objects moving in the machine's foreground. The waves that are reflected back allow the device to create a 'blip' that indicates the size as well as the proximity of the contact. However, when a plane, like the B-2, flies through the radar pulses, all of the pulses are directed away from the radar dish. This means that the radar acts like nothing is there, and the stealth bomber can go undetected.

The B-2 does show up on some more precise radars, but it simply appears as a large bird, rather than a military aircraft. All of this engineering makes stealth bombers almost impossible to be detected with modern electronic detection abilities. The B-2 is fitted with traditional rudders, but using them increases the plane's cross-sectional signature on the radar. So, engineers implemented the ability to differentially thrust the bomber's sleek engines to allow the plane to turn while in stealth mode. 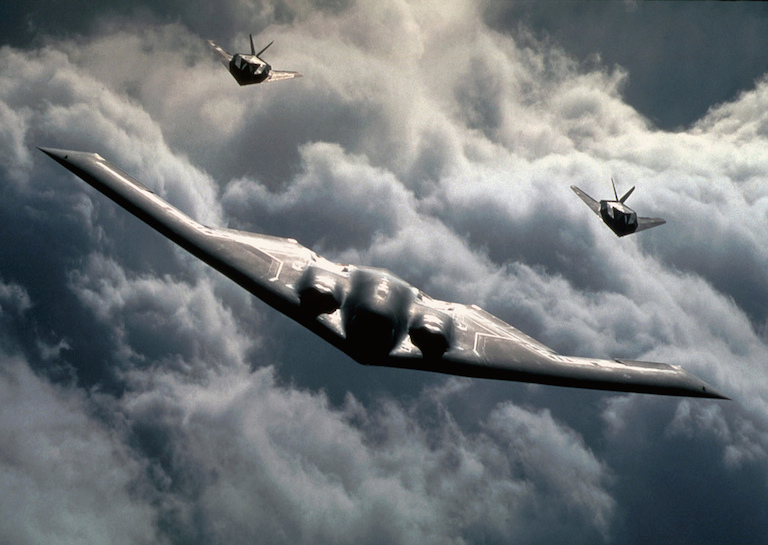 In terms of impact on modern warfare, the creation of the B-2 bomber was completed after the end of WWII, which is good when you take into account the potential devastation this plane would have caused. Stealth capabilities have been the dream of many militaries in the past, and now, modern computer design allows more effective aircraft to be built.