A NASA backed project has developed a prototype of a steam powered asteroid hopping spacecraft.

Steam power was a critical technological invention of the 17th century. It brought about the invention of the steam-powered railway and a multitude of the industry that changed the world forever. Steam engines these days are usually limited to demonstration models and hobby craft.

Given the very SpaceX inspired the name of “WINE” or "World Is Not Enough", the small vehicle is designed to extract water from asteroids or other space rocks which it can use to generate steam to propel it to its next destination.

“We could potentially use this technology to hop on the moon, Ceres, Europa, Titan, Pluto, the poles of Mercury, asteroids — anywhere there is water and sufficiently low gravity,” says Phil Metzger, UCF planetary researcher.

“These spacecraft will be explorers.”

The hopper solves one of the big problems for long term space exploration: fuel. Fuel is heavy to carry and only finite. But if a vehicle could generate its own supply, it could theoretically travel forever.

“The WINE-like spacecraft have the potential to change how we explore the universe,” says Honeybee vice president Kris Zacny.

“We know there is a lot of water sequestered away in asteroids and on the moon, and we know it can be converted into rocket fuel,” Metzger says.

“But it will be even simpler and therefore a smaller step to take if we just use that water for steam propulsion instead.”

NASA funded the project through its Small Business Technology Transfer program. Metzger initially developed the spacecraft as a computer model, proving it would world IRL.

The Honeybee Robotics with assistance from researchers at Embry-Riddle Aeronautical University in Florida built a microwave-sized prototype. 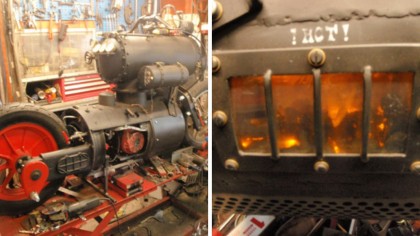 “WINE successfully mined the soil, made rocket propellant, and launched itself on a jet of steam extracted from the simulant.” WINE works by drilling down into the soil of the asteroid and then heats it until water vapor rises which then captured and frozen.

Solar panels on the craft would power the extraction process. While steam offers some fairly powerful thrust, for longer space missions the vehicle might need to be augmented by a solar sail. This would allow the vehicle to travel at greater speeds while its steam-powered system could provide maneuverability.

In theory, a system like this would mean the craft could travel through space forever. The research team is now looking for funding partners to continue their research and development.