He's said it before and he'll say it again, maybe its time we really took him seriously?

The world’s most famous astrophysicist believes that robots will one day take over humanity. Stephen Hawking once again warned us of an AI mutiny in our midst. He believes that technology has the potential to develop a will of its own and could one day become uncontrollable.

"I fear that AI may replace humans altogether," the physicist told Wired magazine, as cited by the Cambridge News. "If people design computer viruses, someone will design AI that improves and replicates itself. This will be a new form of life that outperforms humans." 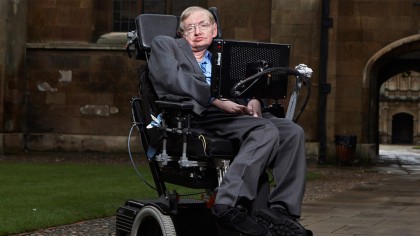 However, humanity itself has already reached “the point of no return” and may destroy itself first, the 75-year-old academic predicts:

“Our earth is becoming too small for us, global population is increasing at an alarming rate, and we are in danger of self-destructing.”

Hawking believes that to quell this oncoming apocalypse we need to come up with a better space program "with a view to eventually colonizing suitable planets for human habitation,” he told Wired magazine. Planets like Mars are places Hawking thinks should be under even more scrutiny.

Though Hawking isn’t completely sure how AI will affect us, he isn’t glass half empty. It might not be that bad. In October of last year, while speaking at Cambridge University’s David Attenborough building, he mused about both the pros and cons of automation.

"Perhaps with the tools of this new technological revolution, we will be able to undo some of the damage done to the natural world by the last one - industrialization. And surely we will aim to eradicate disease and poverty finally. Every aspect of our lives will be transformed, In short, success in creating AI could be the biggest event in the history of our civilization. But it could also be the last unless we learn how to avoid the risks. Alongside the benefits, AI will also bring dangers, like powerful autonomous weapons, or new ways for the few to oppress the many." he said at the conference.

With that in mind, what are some of the many companies currently using AI in their operations? ELSA, an acronym for English Language Speech Assistant, learns from speech data fed into its system, then uses this knowledge of native speech patterns to help users correct their pronunciations.

Google is probably one of the most well-known proprietors of artificial intelligence, powering personal assistants in their mobile phone systems and home devices. More and more, speaking to our gadgets like they’re another entity is becoming more commonplace.

Maybe Hawking is on to something? He along with other tech titans signed an open letter in 2015 calling for research into the pitfalls of AI, among the signatories was Elon Musk and Steve Wozniak.

“We believe that research on how to make AI systems robust and beneficial is both important and timely and that there are concrete research directions that can be pursued today,” stated the conclusion of the letter, written by Future of Life Institute.