Stephen Hakwing worked with Professor Hertog on the theory in the years before his death. In their new paper, Hawking and Hertog say the eternal inflation model is wrong.

By  Jessica Miley
May 03, 2018
Lwp Kommunikáció/Flickr

The late professor Stephen Hawking's final theory on the origin of the universe has been published today in the Journal of High Energy Physics. Hawking collaborated with Professor Thomas Hertog from KU Leuven on the paper which was submitted for publishing before Hawking's death in March this year.

The paper’s ideas are based on string theory, it predicts the universe is finite and that the universe's origin may, in fact, be far more simple than current theories relating to the Big Bang. Modern Big Bang theorists believe that the universe came into existence with a burst of inflation that started to occur just moments after the Big Bang itself.

It is thought that once this inflation begins the quantum effects can keep it going indefinitely. The part of the universe that we can observe is just a hospitable pocket where inflation has ended.

"The usual theory of eternal inflation predicts that globally our universe is like an infinite fractal, with a mosaic of different pocket universes, separated by an inflating ocean," said Hawking in an interview last autumn. "The local laws of physics and chemistry can differ from one pocket universe to another, which together would form a multiverse.

But I have never been a fan of the multiverse. If the scale of different universes in the multiverse is large or infinite the theory can't be tested." In their new paper, Hawking and Hertog say the eternal inflation model is wrong.

"We predict that our universe, on the largest scales, is reasonably smooth and globally finite. So it is not a fractal structure."

"We predict that our universe, on the largest scales, is reasonably smooth and globally finite. So it is not a fractal structure," said Hawking. Their latest research doesn’t disprove multiverses, but reduces them to a much smaller range.

This means the multiverse theory will be able to be tested by a larger range of physicists in the future. 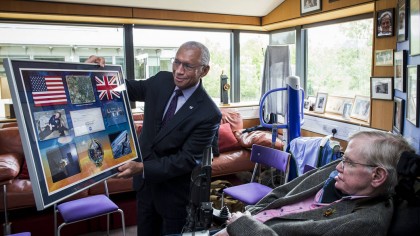 Professor Hertog whose work has been supported by the European Research Council, already has plans to test it by looking for gravitational waves that could have been generated by eternal inflation.

Hertog first announced the new theory at a conference at the University of Cambridge in July of last year, organized on the occasion of Professor Hawking's 75th birthday.

The research by Hawking and Hertog has been published in the Journal of High Energy Physics, and can be read in full on arXiv.

Via: Journal of High Energy Physics

How Much Information Is in the Universe? We May Finally Have an Answer