HPE and COSMOS open a more ambitious phase of their 20-year partnership together thanks to the upgraded computer storage capabilities in the Supercomputer, with the creation of a never-before-seen 3D map of the universe as the ultimate objective.

Though there are still many mysteries of the universe which remain, and which we look forward to solving with the next biggest breakthrough or discovery, a new joint effort between Hewlett-Packard Enterprise’s (HPE) newest supercomputer and the Center for Theoretical Cosmology (COSMOS), Stephen Hawking’s research group, hopes to come one step closer to doing this.

The Superdome Flex is the name of the supercomputer, and it promises to be a very useful tool in the project: the high-speed memory possesses an incredible 48 terabytes of data. Beyond that, the updates storage system which HPE opted to install in the machine means that data can be processed at a much greater speed, which will come in handy as COSMOS has the enormous task of processing roughly 14 billion years of data, a comprehensive effort which has two purposes: consolidating pre-existing knowledge of the universe, and filling in important information gaps. 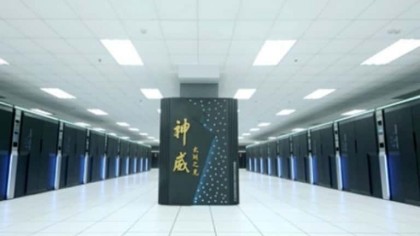 By many accounts, and as hard as it may be to believe, this supercomputer might be a predecessor to an even greater invention that is in the works: “The Machine.” A prototype is in development and HPE boasts that it will have a storage memory of 160 terabytes and be built with the same design concept as the current Superdome Flex.

Technical specifications (impressive as they are) aside, the true aim of the project is clear: create the most detailed and comprehensive 3-dimensional map involving the early universe that has ever been executed. COSMOS, in fact, has been employing one of HPE's supercomputer's for two decades now since their work began in 1997, but they feel that this new stage of their collaboration will yield even more success. Stephen Hawking said of the important undertaking: “Our COSMOS group is working to understand how space and time work, from before the first trillion trillionth of a second after the Big Bang up to today.”

The official name given to the project is “Beyond the Horizon—Tribute to Stephen Hawking,” which is a fitting tribute to the astrophysicist. Cambridge University Professor and COSMOS Coordinator Paul Shellard said in a university statement discussed why the name was devised: “Hawking is a great theorist but he always wants to test his theories against observations. What will emerge is a 3D map of the universe with the positions of billions of galaxies.”

The project will be supported by the European Space Agency's (ESA) Euclid probe, which seems set for launch in 2020. It will gather valuable data which will be used for gaining a greater understanding for the scientists of the dark universe, more specifically the effects that dark matter and dark energy have on the overall workings of the universe. Also, no doubt, old theories about the universe may also be confirmed thanks to this project.

The true appeal of this project is that it seamlessly combines the old and new (in a theoretic sense), an objective which mirrors the essence of our universe, a vast space in which time past and present become inextricably linked. We look forward to seeing the progress which will unfold in the next few years.