Steve Wozniak Pleads for AI Saying It's Here to 'Help, Not Replace Us'

Apple co-founder Steve Wozniak throws his support behind AI development at the Money20/20 conference. He asked crowds to not fear AI rather embrace it or be crushed by its 'steamroller'.

Co-founder of Apple, Steve Wozniak told crowds at the annual Money20/20 conference in Vegas on Sunday that we have no need to fear the rise of AI. He asked the crowded conference hall, “If you're scared of AI, how are you going to stop it from happening? You can't. You'll just get in the way of the steamroller. The idea of new technology replacing jobs has been around for hundreds of years. It is a scare story."

Wozniak pointed to the industrial revolution as an example of technology taking over jobs. He continued, highlighting that in this case, humans adapted to the seemingly frightening changes, and in most cases improved their lives because of it. He took a humanitarian view on robots, reminding audiences that we are the ones doing the programming. “We get to run the machines. We have never talked about a single AI machine that would sit and think, ‘What should I do? What problem should be solved?” he said.

Wozniak was less excitable about automated cars, warning that despite the hype, we are a long way off automated cars that are smart enough to be able to avoid unexpected obstacles and irregular driving conditions. He went on to describe AI in relation to autonomous vehicles, saying, “AI is a mistaken phrase [when discussing automated driving today]. It is still just a bunch of rules: that is simulated intelligence. When we have automated cars they will be able to handle to real world situations like real humans do. I do believe [automated driving] technology should be developed and used." 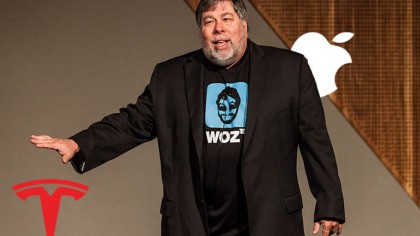 Wozniak who invented Apple’s first two computers and holds a permanent residency in Australia wasn’t always so bbright-eyed about AI. In an interview with the Australian Financial Review in 2015, Wozniak was quoted as saying, “Computers are going to take over from humans, no question.” He went on to say , "Like people including Stephen Hawking and Elon Musk have predicted, I agree that the future is scary and very bad for people. If we build these devices to take care of everything for us, eventually they'll think faster than us and they'll get rid of the slow humans to run companies more efficiently. Will we be the gods? Will we be the family pets? Or will we be ants that get stepped on? I don't know about that … But when I got that thinking in my head about if I'm going to be treated in the future as a pet to these smart machines … well I'm going to treat my own pet dog really nice."

Tesla CEO, Elon Musk previously called on the UN to ban lethal autonomous weapons, otherwise known as “killer robots”. Since the open letter request from Musk and other big names in the science and tech world, including Stephen Hawking and Google DeepMind Mustafa Suleyman the UN has opened an office in the Netherlands dedicated to the monitoring and research of Artificial Intelligence (AI) technologies.