A new hybrid conductor that's part polymer and part liquid metal could be a critical new innovation in bringing the world flexible electronics.

Imagine being able to fold up a tablet or stretch a laptop. These types of ultra flexible devices are one step closer to becoming a reality thanks to a new innovation. A team of Chinese researchers recently created a unique material capable of conducting electricity while also being stretched and bent.

The thin materials are a combination of elastic polymers and liquid metals. They can easily take any two-dimensional shape and still conduct electricity. They're also non-toxic, according to the researchers who developed it. The stretchy material is certainly one of its kind, the team from the National Center for Nanoscience and Technology said.

"These are the first flexible electronics that are at once highly conductive and stretchable, fully biocompatible, and able to be fabricated conveniently across size scales with micro-feature precision," said senior author Xingyu Jiang, a professor at the National Center for Nanoscience and Technology. "We believe that they will have broad applications for both wearable electronics and implantable devices." 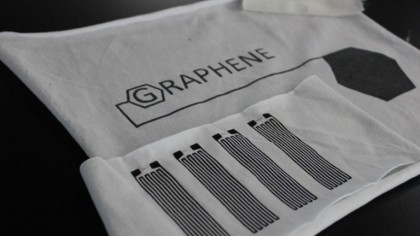 These New Flexible Batteries Can Be Printed Directly on to Textiles

Jiang and the rest of the team's work appeared in a recent issue of the interdisciplinary journal iScience.

The type of material created by the team can be classified as a metal-polymer conductor (MPC). This is because it exists as a combination of polymers and metals with very different but equally desirable properties. For example, with this particular case, the metals aren't like standard solid conductive metals like copper, gold or silver. Instead, they act like gallium and iridium -- two elements which are thick liquids but allow for electric current to run through them. Using this liquid into a network of polymers made from silicone could create "mechanically resilient materials with enough conductivity to support functioning circuits," the team explained in a statement.

The authors further compared the material to liquid metal islands "floating in a sea of polymer." There's a liquid mantle that allows for the material to be fully conductive underneath. In testing the material, the researchers have discovered it functions well as sensors for keyboard globes and even as electrodes for stimulating DNA passing through the membranes of cells.

"The applications of the MPC depend on the polymers," said first author Lixue Tang, a graduate student in Jiang's research group. "We cast super-elastic polymers to make MPCs for stretchable circuits. We use biocompatible and biodegradable polymers when we want MPCs for implantable devices. In the future, we could even build soft robots by combining electroactive polymers."

The applications for this type of material could go significantly farther than the researchers could imagine. However, for now, the team hopes to apply the MPC technology to biomedicine -- more specifically for patches to identify heart disease and reduce the effects of cardiovascular damage on the body.

"We wanted to develop biocompatible materials that could be used to build wearable or implantable devices for diagnosing and treating disease without compromising quality of life, and we believe that this is a first step toward changing the way that cardiovascular diseases and other afflictions are managed," said Jiang.