A new study has discovered a cell-wide web of nanotubes, which indicates that cells work just like computers in how they route signals and instructions to their component parts.

New research indicates that our cells may operate in the same way that computers do when they send signals to various parts of the cell with instructions on how to function.

Inside every cell, organelles that carry out the various life processes sit in an enclosed sea of material called cytoplasm. It was thought that waves in this cytoplasm were the mechanism used to send and receive signals throughout the cell, with the frequency of the wave representing the signal itself. Now, scientists at the University of Edinburgh (UE) have found evidence that animal and plant cells move information and instructions throughout its internal structure similar to the way a computer operates when it routes these kinds of signals through various circuits.

"We found that cell function is coordinated by a network of nanotubes, similar to the carbon nanotubes you find in a computer microprocessor," said Professor Mark Evans of the UE Center for Discovery Brain Sciences and co-author of the paper describing the researchers' finding, published last week in the journal Nature Communications.

The research indicates that information within the cell is encoded in the form of charged molecules which are passed down the various paths of a cell-wide web of nanotubes, similar to the way an electric current is routed through circuits on the motherboard of a computer to its various component parts. These signals completely regulate the activities within the cell and are even responsible for cell wide behavior, like when a muscle cell relaxes or contracts.

This network within the cell is can also be completely rewired as needed. For instance, when this network relays instructions to the nucleus of the cell, which houses its genetic material, these instructions can make tiny alterations in the genetic structure that releases certain genes, enabling them to be expressed. When a cell switches from a normal, steady state to a growth state, this network will completely rewire itself in order to express the genes in the nucleus' genetic code that enables the cell's growth. 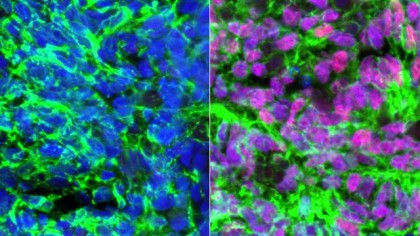 Evans and his colleagues discovered this cell-wide network while observing charged calcium molecules as they moved around inside of various cells, using high-powered microscopes and computer algorithms similar to those that enabled scientists to capture the first image of the shadow of a black hole's event horizon.

"The most striking thing is that this circuit is highly flexible, as this cell-wide web can rapidly reconfigure to deliver different outputs in a manner determined by the information received by and relayed from the nucleus," Evans said. "This is something no man-made microprocessors or circuit boards are yet capable of achieving."